The Cartoon Network Wiki
Register
Don't have an account?
Sign In
Advertisement
in: Shows, Acquired Series, 2000s shows,
and 5 more

Xiaolin Showdown aired on WB Kids 2003 - 2006. But on Cartoon Network it aired 2006 - November 2007. Young martial arts students Omi, Kimiko, Raimundo and Clay quest to find magical artifacts before they fall into the hands of evildoers trying to amass enough power to take over the world. Xiaolin Showdown is an American animated television series that aired on Kids' WB and was created by Christy Hui. Set in a world where martial arts battles and Eastern magic are commonplace, the series follows four young Xiaolin warriors in training who battle the Heylin forces of evil. They do this by protecting Shen Gong Wu (ancient artifacts that have great magical powers) from villains that would use them to conquer the world. Typical episodes revolve around a specific Shen Gong Wu being revealed which results in both sides racing to find it. Episodes usually reach a head when one good and one evil character must challenge each other to a magical duel called a Xiaolin Showdown for possession of the artifact.

A follow-up series, Xiaolin Chronicles, previewed on August 26, 2013, on Disney XD. It began its long-term run on September 14 the same year, but ran for only one season and 26 episodes, later ending on Netflix on July 1, 2015, in the U.S.

Omi, Kimiko, and Clay have recently risen to the rank of Shoku Warrior except for Raimundo (who attained the rank previously), where they must continue to uphold their duty of finding and collecting all of the mystical Shen Gong Wu artifacts before the evil Heylin forces do. They are joined by a recruit from Europe named Ping Pong, who competes with a mysterious girl named Willow for the position of Xiaolin Apprentice. Through the events of the show's pilot, the monks learn that Willow is evil, and is the apprentice to the formidable Heylin warrior Chase Young. She and Chase destroy the temple and take all the Shen Gong Wu. With their temple destroyed, the monks must search for a new temple, while still trying to collect all the Shen Gong Wu and protecting the world from the likes of Chase Young and the villainous Jack Spicer. 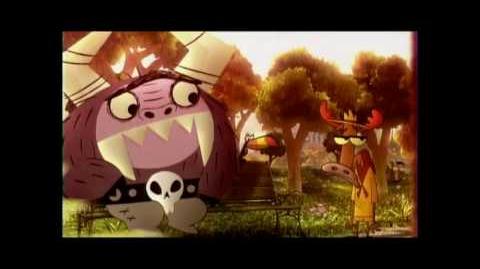 At 7:00 PM, the marathon was followed by the Naruto Marathon on Toonami.