The Cartoon Network Wiki
Register
Don't have an account?
Sign In
Advertisement
in: Shows, Hanna-Barbera Series, Shows older than the network,
and 3 more

Wacky Races is an American animated television series produced by Hanna-Barbera. The series, inspired by the 1965 slapstick comedy film The Great Race, features 11 different cars racing against each other in various road rallies throughout North America, with each driver hoping to win the title of the "World's Wackiest Racer." Wacky Races ran on CBS from September 14, 1968, to January 4, 1969. Seventeen episodes were produced, with each episode featuring two different races.

The cartoon had an unusually large number of regular characters, with twenty-three people and animals spread among the 11 race cars. Reruns of the series began airing on Cartoon Network on October 1, 1992. A reboot series was made in 2017 for Boomerang.

The Wacky Races are a series of car competitions in which 11 racers, race in locations throughout North America. The rules are extremely lax and allow for almost any vehicle design, power system and a wide range of tactics like combat and shortcuts. Despite this loose rule structure, competitors Dick Dastardly and his dog sidekick, Muttley, are still determined to cheat in their own ineffectual way.

The vehicles and their drivers are:

The show gave the results of each race at the end of each episode, (the first, second, and third placings are given by the narrator, and we sometimes saw some or all of the other cars cross the finish line). The show never indicated a particular scoring system or way to determine who won the Wacky Races as a whole. However, based on FIA's 1961-90 Formula One point-scoring system in use when the show first aired (9 points for 1st place, 6 for 2nd and 4 for 3rd), the Slag Brothers would finish with 87 points, followed by Rufus Ruffcut and Sawtooth with 79, and then The Ant Hill Mob with 74. Based on this, the cumulative totals for first, second, and third place finishes for each contestant are presented below:

To win, one did not actually need to be in one's assigned vehicle; apparently all that was necessary was for the driver to cross the finish line in a conveyance of some sort (a flying carpet or a giant ice cube would do), although racers were apparently prohibited from simply walking across. Oddly, however, disqualification would result if a driver crossed the finish line "in the wrong vehicle."

The basic ideas behind Wacky Races and some of the characters were used again by Hanna-Barbera in later years: 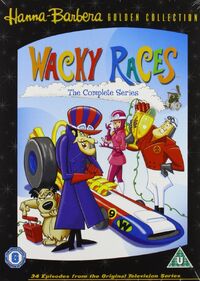 Warner Home Video released the entire series, with commentaries and other extras, in a DVD box set on October 26, 2004. All 34 segments can also be purchased on the iTunes Store.