The Cartoon Network Wiki
Register
Don't have an account?
Sign In
Advertisement
in: Creators, Writers, Producers,
and 4 more 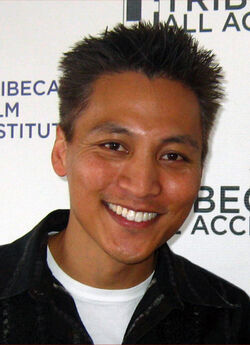 Partible was born in Manila and grew up with an avid love of drawing. Despite growing up copying artwork from collections of old comic books, it was not until college that Partible decided to pursue a career in animation. Partible attended Loyola Marymount University where he began work on a senior thesis project titled Mess O' Blues (1993). Initially a film about three Elvis Presley impersonators, the short time to produce the cartoon influenced Partible to shorten it to just one. Upon graduation in 1993, Partible was 22 and did not have the extensive experience and portfolio that studios were looking for, and for a while worked in a daycare program for a local elementary school. During that time, Mess O' Blues was shown by Partible's animation professor, Dan McLaughlin, to a friend working for Hanna-Barbera. The studio loved the film and asked Partible to do a pitch for a seven-minute cartoon based on it – what would become Johnny Bravo.

The short was produced for Cartoon Network's new animation showcase titled World Premiere Toons. Also known as What a Cartoon!, the series’ short cartoons mirrored the structure of a theatrical cartoon, with each film being based on an original storyboard drawn and written by its artist/creator. Partible initially roomed with Craig McCracken (creator of The Powerpuff Girls), Paul Rudish (a designer on that series), and Genndy Tartakovsky (creator of Dexter's Laboratory.) The only two cartoonists who worked for the company fresh out of college were Partible and Seth MacFarlane (eventual creator of Family Guy, American Dad!, and The Cleveland Show). Partible changed his character from Mess O’ Blues around so that "he would be more of a '50's iconic James Dean-looking character that talked like Elvis." Partible picked voice actor Jeff Bennett to play Johnny Bravo solely based on his young, hyped Elvis impression.

The short, "Johnny Bravo", premiered on World Premiere Toons on March 26, 1995, and involved Johnny trying to score with a zookeeper girl by capturing a runaway gorilla. Partible, with a small team of animators, animated the short themselves in-house at Hanna-Barbera using digital ink and paint (the latter shorts and first three seasons of the series would instead use the traditional ink and paint and film camera.) Two more shorts on the program followed (Jungle Boy in "Mr. Monkeyman", and Johnny Bravo and the Amazon Women) and the shorts were so popular that Cartoon Network commissioned a series based around Johnny Bravo, consisting of 13 episodes.

The crew of the first season of Johnny Bravo consisted of several writers, animators, and directors from World Premiere Toons, including the aforementioned MacFarlane, Butch Hartman, Steve Marmel, and John McIntyre. Veteran cartoonist and animation legend Joseph Barbera was also a creative consultant for the first season of the series. The series premiered on July 7, 1997 and three additional seasons followed. Partible left and was not present during the second and third seasons of the series for unknown reasons; he returned to produce "A Johnny Bravo Christmas" and its fourth season.

He has since produced original materials for Film Roman, Walt Disney Television Animation, Fox Kids and for NBC's Medium, for which he was the animation producer for the premiere of the third season. Partible is currently serving as executive producer for Cartoon Network Asia's original programming, teaches animation workshops at Loyola Marymount University, and he is working on a pilot for Disney.