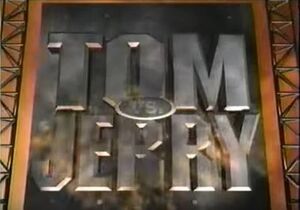 Tom vs. Jerry was a marathon that aired on Cartoon Network on Saturday, January 24, 1998 and featured select Tom and Jerry shorts. The marathon coincided with the Super Bowl of that year which was held on Sunday, January 25, 1998. This was the first in a series of four Super Bowl spoof marathons that aired annually on Cartoon Network from 1998-2001. These marathons came to be known as "The Big Game"; however, only the final two actually featured this moniker.

Unlike the later Big Game specials, this one had no real pregame segments between the shorts leading up to the game itself, which itself consisted only of clips from one short, Quiet Please!, commentated by John Madden and Pat Summerall. Also, Tom and Jerry's score consisted of pictures instead of a numbered score, with Jerry ultimately winning.

Retrieved from "https://cartoonnetwork.fandom.com/wiki/Tom_vs._Jerry?oldid=101541"
Community content is available under CC-BY-SA unless otherwise noted.