The Cartoon Network Wiki
Register
Don't have an account?
Sign In
Advertisement
in: Shows, Tom and Jerry Series, Boomerang,
and 3 more 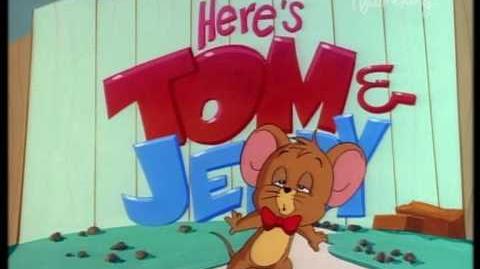 The Tom & Jerry Kids Show is an animated television series, co-produced by Hanna-Barbera Productions and Turner Entertainment, starring cat-and-mouse duo Tom and Jerry as children (child kitten and toddler mouse). The show premiered in 1990 and continued airing until 1994. The series is about Tom Cat and Jerry Mouse in their childhood and their friends Droopy and Dripple and Spike and Tyke. It began airing as the first program of the Fox Broadcasting Company's children's block, Fox Kids on September, 8 1990. It aired on YTV from 1990 to 1999 in Canada. The series was given a Daytime Emmy nomination in 1992 for Outstanding Music Direction and Composition.

The series is somewhat similar to the "older" version of the original 1940-58 theatricals, partly akin to being produced by creators William Hanna and Joseph Barbera. In terms of violence level, they are far closer to the classic cartoons than previous television adaptions such as Filmation's The Tom and Jerry Comedy Show although somewhat milder than Hanna and Barbera's original series. Part of it is similar to Pink Panther and Pals and Garfield and Friends. Droopy and Dripple went on to star in their own short-lived spin-off Droopy, Master Detective.

In 1994, Fox canceled the series, and it soon began airing in reruns on Cartoon Network in 1995 and ended in 2006 when the show was removed from the Cartoon Network schedule and instead moved over to its sibling network Boomerang where it currently airs.

The mute enemies were back on Saturday morning, starring in two seven-minute segments per episode. Apparently, the rivalry between the two had started early, as the youthful Tom and Jerry were up to their old tricks: fighting, chasing, competing, and generally getting on each others nerves. Each episode was jam-packed with action, adventure, and laughs aplenty. The duo are joined by Droopy and his son Dripple, who are private detectives after McWolf. Other characters such as Wild Mouse, Calaboose Cal and Slowpoke Antonio make occasional appearances.