The Cartoon Network Wiki
Register
Don't have an account?
Sign In
Advertisement
in: Shows with wikis, Shows, 2000s shows,
and 17 more
English

22 minutes (11 minute segments)
Status
Cancelled
Time Squad is an American animated television series created in 2001 by Dave Wasson for Cartoon Network. The series premiered during Cartoon Network's marathon block "Cartoon Cartoon Summer" on June 8, 2001, and ended after two seasons on November 26, 2003, airing 26 episodes in total. As of 2017, the show currently airs on Boomerang in Germany.[1]

It is the last Cartoon Network original series to be premiered under Betty Cohen's tenure.

The show is set in the year 100,000,000 AD, on a satellite which orbits Earth. This future Earth is never visited directly, though it is referred in dialogue as a peaceful utopia where there are no longer any problems to solve. All nations of the world have merged into one, and, according to Tuddrussel, there are "no wars, no pollution, and bacon is good for your heart".

Despite this cheerful vision of the future, the space station on which the characters live and from which they travel to the past is remarkably dystopic. It features a shooting range, a terrarium, and a prison for repeat offenders, but it is dank, outdated (for the time) and unclean. Mostly this seems to be down to Officer Buck Tuddrussel, a scruffy and immature perennial bachelor, who nevertheless happens to be the station's most senior officer. There were also several accidents aboard the Time Squad Space Station; most notable of which is the terrarium being broken after Tuddrussel plays golf and breaks the glass shell of the station. This action seems to have no consequences in future episodes.

The only other official member of Buck's unit is Larry 3000, a translator robot and former diplomat who was rendered more or less obsolete when all of the world's nations merged. Added to this the fact that neither of them has any great knowledge of history, they made a rather poor team together.

However, when they encounter Otto Osworth, an eight-year-old orphan who happens to be a history genius from the 21st century, he is quickly recruited and added to the team. Otto is shown to be the only one on the team with any enthusiasm or competence for the job. The problem is, neither of the other two is particularly willing to listen to his advice, and he must often resort to trickery to make sure the mission is completed.

A Time Squad tombstone was featured in the graveyard background of the opening sequence of The Grim Adventures of Billy and Mandy.

Tuddrussel made an appearance in the MAD episode, Once Upon a Toon.

Buck Tuddrussel, Larry 3000 and Otto Osworth appeared in the ending scene of Villainous special, The Lost Cases of the Future.

Larry 3000 made a cameo appearance in the OK K.O.! Let's Be Heroes episode, Crossover Nexus. He was seen as one of the Cartoon Network heroes that were summoned and defeated by Strike.

The series was released on a single DVD volume in the UK.

Larry 3000 as a disembodied head in Cartoon Network Universe: FusionFall

Larry 3000 as stone in the OK K.O.! Let's Be Heroes episode, Crossover Nexus 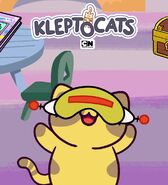 This show has a wiki of its own: Time Squad Wiki.