This series was the first in which Daphne, Velma and Fred were discarded. Shaggy, Scooby and Scrappy were the featured characters in this program. The trio headed the Fearless Detective Agency which traveled throughout the world solving mysteries.

With the exception of the "Richie Rich Gems", each episode featured three Scooby-Doo segments and three Richie Rich segments between them. The episodes that contain Scooby-Doo cartoon segments that are repeats from earlier episodes are noted in the following list with “rr” used to indicate where a previously aired cartoon was rerun. 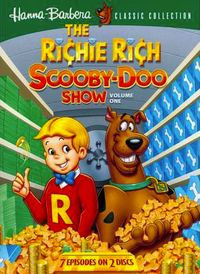 On May 20, 2008, Warner Home Video released The Richie Rich/Scooby-Doo Show: Volume 1 on DVD for the Hanna-Barbera Classics Collection Region 1 for the first time. It features cartoons from the first seven episodes but alters the segments order from the original air-date order. It is unknown when Warner Home Video will plan to release the remaining 14 of the show's episodes on an upcoming DVD set.