The Cartoon Network Wiki
Register
Don't have an account?
Sign In
Advertisement
in: Shows, 1950s shows, 1960s shows,
and 3 more

Michael Maltese crafted most of the episode stories. Screen Gems originally syndicated the series, followed later by Rhodes Productions, Taft H-B Program Sales, Worldvision Enterprises, then Turner Broadcasting, and now Warner Bros. Television (through their 1996 purchase of Turner). The series was previously aired on Cartoon Network untill 2000 and currently, the show is aired on the Cartoon Network's sister channel, Boomerang, the Canadian station Teletoon Retro and occasionally on the Infinity channel, broadcasting in the Middle East.

Quick Draw (voiced by Daws Butler) was usually depicted as a sheriff in these segments set in the American Old West. Quick Draw was often accompanied by his deputy, a Mexican burro named Baba Looey (voiced by Daws Butler and his name being a word play on Desi Arnaz's hit song called "Babalu"). Although technically the side-kick, or deputy, to the main character of Sheriff Quick Draw, he is often portrayed as the more intelligent half of the duo; at times realizing some detail about a given situation and trying desperately without success to caution QuickDraw of a trap or other danger.

Quick Draw would also assume the identity of the masked vigilante "El Kabong" (a parody of Zorro). His introduction went as follows - "Of all the heroes in legend and song. there's none as brave as El Kabong" - As El Kabong, Quick Draw would attack his foes by swooping down on a rope with the onomatopoeiac war cry "KABOOOOOONG!", or, at times, "OLAYYYYEEEE!" and hitting them on the head with an acoustic guitar which is always referred to as a "kabonger", producing a distinctive kabong sound and usually destroying the guitar in the process. 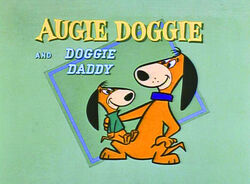 Starring a young Dachshund named Augie Doggie (voiced by Daws Butler) and his father Doggie Daddy (voiced by Doug Young impersonating Jimmy Durante). Doggie Daddy (voiced by Doug Young impersonating Jimmy Durante) tried to do the best he could at raising his rambunctious son Augie (voiced by Daws Butler). Augie, who loved his father, would often refer to him as "dear old Dad." Their mutual admiration included Daddy gently chiding, "Augie, my son, my son", when he would disappoint his father; and when his son would say or do something that inspired pride, Daddy would turn to the audience and say with a grin, "Dat's my boy who said dat!" 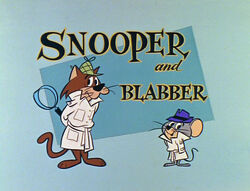 Starring a detective cat named Super Snooper (voiced by Daws Butler impersonating Ed Gardner) and his sidekick Blabber Mouse (voiced by Daws Butler). Super Snooper is more or less the one in command whenever the pair takes on a case, while Blabber Mouse (his name being a play on “blabbermouth”) follows whatever orders Snooper gives him. Snooper’s voice was patterned after Ed Gardner’s Archie on the 1940s radio show Duffy’s Tavern. Blabber speaks with a lisp, hence he calls his partner “Shnooper”. It was one of the rare shows that paired a cat and mouse together that were in no way enemies.