11 minutes (approx.)
Status
Abruptly cancelled
The Problem Solverz (originally titled Neon Knome) is an American animated television series created by Ben Jones, a member of the art collective Paper Rad, for Cartoon Network. The series centers on the titular Problem Solverz trio of Alfe, Roba, and Horace, as they solve and sometimes create the various problems that plague their town. After the original pilot Neon Knome was rejected by Cartoon Network's late-night programming block Adult Swim for looking "too cute", it was picked up and re-tooled by the main network, which premiered the series on April 4, 2011. Due to the shows mixed reception and bad ratings, Cartoon Network stopped airing the show after season 1. In March 30, 2013, The unaired season two episodes were released on Netflix, only to be removed in 2015.

Series creator, Ben Jones, originally created the characters in The Problem Solverz when he was in primary school. Later on in his life, he would join an art collective known as Paper Rad, who specialized in creating art with bright saturated neon colors. Ben Jones would later create several shorts based on his concepts and released them in 2006 and 2008. Ben Jones would later pitch his concept to Adult Swim, only for it to be rejected for being "too cute", and the show was retooled as a Cartoon Network series.

The series' first season is available to watch on iTunes.

The series first and second seasons were made available on Netflix, but were removed in 2015. 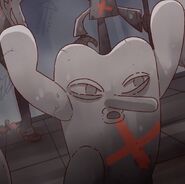