The Cartoon Network Wiki
Register
Don't have an account?
Sign In
Advertisement
in: Shows, 1990s shows, Hanna-Barbera Series,
and 3 more

The Pirates of Dark Water

The Pirates of Dark Water

22 minutes
Status
Ended
The Pirates of Dark Water is an American animated series produced by Hanna-Barbera from 1991 to 1993. The first five episodes of the series premiered in syndication in early 1991 as a five-part mini-series titled Dark Water. Following a number of animation tweaks and other changes by Hanna-Barbera, those episodes were rebroadcast later in 1991 as the first five episodes of the regular series.

The first season of the series aired on ABC, while the second season aired in first-run syndication as part of The Funtastic World of Hanna-Barbera. The series was never completed, ending abruptly after 21 episodes with only eight of the thirteen treasures collected. In 1994, a year after the final episode aired, a video game featuring a conclusion to the plot was released for the Sega Genesis. The series later aired in reruns on Cartoon Network and Boomerang.

The alien world of Mer is being devoured by an evil substance known as Dark Water. Only Ren, a young prince, can stop it by finding the lost Thirteen Treasures of Rule. His loyal crew of misfits that help in his journey are an ecomancer (Tula), a monkey-bird (Niddler), and a treasure-hungry pirate (Ioz). The evil pirate lord, Bloth, will stop at nothing to get the treasures for himself and provides many obstacles for Ren and his crew.

Mer is a world very different from Earth, with a variety of its own creatures with varying degrees of intelligence, such as the monkey-bird and the leviathan. The world has twenty seas, and most of the crew's stops are made at islands. Parts of Mer are continually in flux, like a river of spiked rocks that rises out of the ocean in the first episode and appears to defy physics (none of the characters are bewildered by the spectacle aside from its danger), but whether this is the Dark Water's doing or just the nature of the geologically hyperactive planet is unknown.

Ren — The prince of the once-grand kingdom of Octopon and the main protagonist, Ren was raised by a lighthouse keeper in the outskirts of his homeland, unaware of his destiny and heritage. He wields the broken sword that belonged to his father in its whole form. By the beginning of the second season, he freed one half of the planet from the Dark Water.

Niddler — A monkey-bird who once belonged to Bloth, until he escaped by aiding Ren's own escape from the pirate lord. He hails from the island of Pandawa. He is usually depicted as a little greedy and constantly ravenous for food, his favorite food being minga melons, but he likes Ren, and his ability to fly often comes in handy. In the original five-part miniseries Dark Water, Niddler was voiced by Roddy McDowall. Once subsequent episodes began to be produced and the show was renamed The Pirates of Dark Water, Niddler's voice was re-dubbed with the voice of Frank Welker.

Tula — She is an ecomancer with the ability to control the elements and biological life, both sentient and non-sentient, as well as a natural affinity towards nature and animals. She is headstrong and often flusters Ioz. She is introduced as being a simple barmaid, but she stows aboard Ren and Ioz's ship, claiming she "wanted to get away from the drudgery of life on land." It's soon revealed that she's a character with many secrets.

Ioz — A rogue and pirate, he joins up with Ren initially for the promise of treasure. Throughout the seasons, his character matures and he becomes fond of Ren and his idealism, evolving into a protective brotherly figure to him and often risking his life for Ren and the quest for the Treasures. However, he still continues his attempts at getting rich quickly but is mostly unsuccessful. Ioz also has a younger sister named Solia, who appears in the series. Like Niddler, he originally worked for Bloth, but according to him, "it ended ugly."

Bloth — The ox-sized, humanoid captain of the feared pirate ship Maelstrom, he is after the Thirteen Treasures of Rule to control all the Dark Water in the world, and in effect, Mer itself. He destroyed Primus's fleet seventeen years prior to the timeline of the show, and captured Primus and his aide Avagon, though the seven captains accompanying Primus were able to escape with the Treasures. Bloth has since been hunting them obsessively, and destroying every remnant of the House of Primus just as obsessively, including killing every heir to the throne of Octopon that he could find and ravaging and pillaging the ailing city. He held Primus captive for seventeen years before the old man escaped back to Octopon and to Ren. Upon learning that Primus has a son, he transferred his fanatical hatred of Primus to Ren, and began to hunt the boy across the twenty seas of Mer, in order to capture the Treasures, and to kill Ren and the house of Primus. In the second season, he makes an uncertain and untrusting alliance with Morpho, a major agent of the Dark Dweller.

Mantus — Bloth's second-in-command. He offers his cool and calculating personality as a battle strategist for Bloth's fleet.

Konk — A short, fat pirate who works for Bloth, he lost his leg thanks to a close encounter with his master's ferocious pet the Constrictus. For a long time, Konk was the only one to ever survive being thrown to the monster. Although not particularly smart, Konk possesses more bluster than most of Bloth's crew and is always trying to win Bloth's praise.

The Lugg Brothers — Two huge, dimwitted siblings who are members of Bloth's crew. They try to assist Konk, but their stupidity makes them more of a hindrance. They only make appearances as main characters in the first five episodes of the show.

The Dark Dweller — The powerful, evil creature that created the Dark Water. He had the Treasures originally scattered because their power is the only thing capable of opposing him and his evil master plan to swallow Mer in Dark Water.

Morpho — A servant of the Dark Dweller and the leader of his worshippers, the Dark Disciples. He joins forces with Bloth and serves as the above-water liaison for the Dark Dweller, so that they can aid each other in their mutual goal of killing Ren and his friends, though they have two very different goals for the Compass and Treasures. He was an alchemist who was doing research on the Dark Water when the Dark Dweller captured him and transformed him so that he was no longer fully human, making him into an eternal servant. He possesses a tentacle in place of one arm, and half his body has been reshaped to resemble an amalgam of deep-sea creatures. He refers to himself as a creature of two worlds, Ren's and the Dark Dweller's. 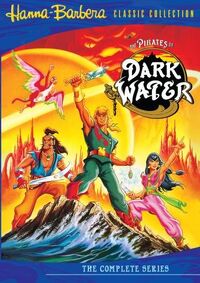 On August 31, 2010, Warner Archive released The Pirates of Dark Water: The Complete Series on DVD in region 1 as part of their Hanna–Barbera Classics Collection. This is a Manufacture-on-Demand (MOD) release, available exclusively through Warner's online store and Amazon.com.

In November 1991, Marvel Comics produced a comic book series based on the show. Originally intended as a six-part limited series, it was extended to nine issues to include a three-part original story.

A series of action figures based on the characters from the show was also produced.  The toyline consisted of Ren, Niddler, Ioz, Zoolie, Bloth, Konk, Mantus, Joat, and the Wraith.

Pirates of Dark Water video games were also released for the Super NES and Sega Genesis platforms, both published by Sunsoft. The Super NES version is a side-scrolling "beat 'em up", co-developed by Japanese and American staff members, where players can choose to play as Ren, Tula or Ioz and fight Bloth's gang. Up to two players can play simultaneously. The Genesis version, developed by Team Iguana, is a side scrolling platform game with RPG elements. A Pirates of Dark Water role-playing game was released in 1994, but had a limited production run.