The Cartoon Network Wiki
Register
Don't have an account?
Sign In
Advertisement
in: Shows, 1970s shows, Hanna-Barbera Series,
and 3 more

The Perils of Penelope Pitstop

The Perils of Penelope Pitstop

22 minutes
Status
Ended
The Perils of Penelope Pitstop is an American animated television series produced by Hanna-Barbera Productions that premiered on CBS on September 13, 1969. The series consisted of a total of 17 half-hour episodes, the last first-run episode airing on January 17, 1970, repeats aired until September 4, 1971.

The series is a spin-off of the Wacky Races cartoon, reprising the characters of Penelope Pitstop and the Anthill Mob. The series previously aired in reruns on Cartoon Network and Boomerang.

The series was patterned on the silent movie era melodrama cliffhanger movie serial The Perils of Pauline using the most successful characters of Wacky Races, namely Penelope Pitstop, the members of Ant Hill Mob and originally Dick Dastardly and Muttley though Dastardly and Muttley were later dropped in pre-production according to this series' DVD release information. Those characters would be later reused in their own series.

Deciding to feature the characters in a different setting, studio heads decided to set the characters into an active adventure format strongly reminiscent of the 1910s. Adding to the cliffhanger serial feel, episodes typically started with a recap such as "Last time we left Penelope, she was in the clutches of the Hooded Claw". Contrary to later editing of the series in rebroadcasts, the original format of the series was to introduce the successive episodes at the end of the just-finished broadcast for the successive week that would present and leave Penelope in the middle of a dangerous situation to overcome. The cliffhanger would end with Penelope being shown placed in direct danger such as being shot out of a circus cannon to land in the wild animal cage. The audience is left there with the indication "Tune in next week for danger in the 'Big Top Trap' ".

The successive episode would include recapping the previous week's end scene introduction and continue onto Penelope's successful avoidance of the danger she encountered. In all rebroadcasts of the series since the original broadcasts as well as on the DVD release of the series, these introduction endings have been removed from the main episodes.

Also from the Wacky Races was the Ant Hill Mob, originally portrayed as a group of crooks but in this incarnation are now either reformed, never had the criminal background of their earlier Wacky Races incarnation, or are engaging in a protection racket. The members also have completely new names, different from the original Wacky Races series (except for their leader Clyde, who was named "Big Clyde" in the Wacky Races), who, with their largely self-aware car, Chugga-Boom, acted as the heroes and were constantly rushing to Penelope's rescue. But their attempts to save her were only half effective. The Mob's reason for being Penelope's friends and guardians is never explained, although the narrator mentions that they were her "benefactors."

The Hooded Claw (voiced by Paul Lynde), aided by his pair of near identical henchmen who always speak in unison, the Bully Brothers (both voiced by Mel Blanc), concocted needlessly Goldbergian plots to kill Penelope (such as a device to drop her from an aircraft, cut her parachute, and then have her drop into a box of wildcats). While the Mob often rescued Penelope, as often as not she needed to rescue the Mob from the unintended effects of their attempts to rescue her. While Penelope was curiously helpless whenever The Hooded Claw grabbed her, once he left her tied up for his fiendish plans to take effect, she usually became resourceful and ingenious, sometimes coming up with spontaneous and creative methodologies to escape her peril.

Penelope was always in a different part of the globe for every peril. Mainly she was in America, but she did go to locations such as Egypt, England, the jungle, Baghdad and the North Pole. These settings were painted by background artist Walter Peregoy.

Just like in other spin-off series, like Dastardly & Muttley in Their Flying Machines, the Wacky Races series is rarely mentioned, not by Penelope, nor by the Ant Hill Mob. Plus the Compact Pussycat from Wacky Races is never seen in the series. Instead of that vehicle, Penelope usually drives a green sports car, or any other vehicle that she finds, or even Chugga-Boom. One reference to the earlier Wacky Races series in this series was in the origin episode "Jungle Jeopardy." In response to Penelope's statement of introducing the character "It's you! My arch enemy, The Hooded Claw!", the Hooded Claw replies "Who did you expect? Dick Dastardly?" The only other suggestion to the Wacky Race version is shown when the Anthill Mob members are all standing behind period convict stripped suit cut-outs in the episode "Carnival Calamity" hackening back to their original criminal versions, opposite to this heroic incarnation. It should be noted this is the only time that the character of Dum Dum is shown in this series with an angry face, same as his Wacky Races version Ring-A-Ding.

Also, in the first sketches of the series, Penelope was supposed to have a younger brother named Johnny Pitstop, who would help the Ant Hill Mob save her from the clutches of the Hooded Claw. In those same sketches, Dick Dastardly and Muttley were supposed to be Johnny Pitstop's personal bodyguards, using once again their car, The Mean Machine. This was all in the first sketches, and never made it to the final work. Unlike other cartoon shows of the era, The Perils of Penelope Pitstop lacks a laugh track.

Created by veteran Hanna-Barbera voice actress Janet Waldo, Penelope is a classic "damsel in distress" stock character as in the old serial The Perils of Pauline. Her catchphrase is "Help, help!" (spoken in an affected upper-class U.S. Southern accent). Throughout the series, she displays a curious combination of ingenuity and helplessness. She often figures out clever ways to get out of a jam, and is very athletic; if any sport happens to be mentioned, it is revealed that she was the women's champion in said sport in college. Nonetheless, when her arch-nemesis The Hooded Claw, voiced by Paul Lynde (who, unknown to her, is her guardian Sylvester Sneekly) grabs her, she is somehow incapable of doing anything other than yelling for help. Like the show's villain The Hooded Claw, she often interacted with the narrator of the show.

Penelope was often rescued from peril by the Ant Hill Mob, a group of seven diminutive men with exaggerated personality traits, clearly owing quite a bit to the characters of the Seven Dwarfs in the Walt Disney film Snow White and the Seven Dwarfs as well as the Keystone Cops which they obviously imitated twice in the series. The seven members usually were portrayed as having unique usable talents such as Zippy's speed, Pocket's technical intellect and gadgetery, and Dum Dum's marksmanship though at times the members were obviously not effective in using their skills as Pitstop's guardians. The seven members are:

The Ant Hill Mob had previously appeared in Wacky Races alongside Penelope Pitstop, although of all seven Mob members, only Clyde kept his Wacky Races name here. The Mob's original Wacky Races car, the Bulletproof Bomb, was replaced by "Chugga-Boom" (voiced by Mel Blanc), which was mostly articulate and seemed to have a mind of its own though at times the Chugga-Boom seemed completely inanimate and was at those times drawn without eyes on the headlights.

The Hooded Claw was the main villain and the alter ego of Sylvester Sneekly, Penelope Pitstop's guardian. And he is also known as self-absorbed, mean,laughable,violent, evil, sinister, treacherous, earnest, responsible, sardonic, negative, emotional, encouraging, laid-back, ingenious, testy, hard-working, efficient, harsh, offensive, observant, diligent, elegant, determined,cowardly, loco, attentive and witty. Contrary to what his name suggests, he has neither a hood nor a claw, preferring to wear a purple suit, and a green hat and cape. In the event of her death, Sneekly stood to inherit Pitstop's fortune. He was a master of disguise, and often aided by his henchmen, the Bully Brothers, twin brothers who dressed alike and talked like movie directors, as well as speaking as one. Each episode's plot involved Sneekly trying to kill Penelope and claim her fortune for himself. She never suspected his intentions, however, because he performed his nefarious deeds only in his costumed persona, The Hooded Claw. However, there was a running gag where Penelope commented to Sneekly that he looked like the Hooded Claw, but there was no way her kind guardian could be that villain. In "Big Top Trap," Sneekley actually reveals to Penelope that he is the Hooded Claw, but Penelope does not believe this, thinking it is just a circus act. But when the Hooded Claw fails or backfires in killing Penelope from his traps when she was rescued by The Ant Hill Mob or being outsmarted by Penelope who manages to released or getting free from his traps, his catchphrase is "Blast!". He himself also got blown from the dynamite plunger in his own trap at the series finale after blaming his failure to kill Penelope and saying his "Blast!" catchphrase and warns the narrator that the next time he will make more various traps once he recaptures Penelope as he makes his last evil laugh while raising his brow knowing of his motives. Sneekly/Hooded Claw was voiced by Paul Lynde, whose participation was uncredited. The new catchphrase is called "Oh, brother! What we villains have to put up with..."

Like Boris Badenov in The Rocky and Bullwinkle Show, Sneekly/Hooded Claw would break the "fourth wall" by at times directly addressing the narrator as the narrator was revealing the crime to the audience, defeating the surprise the Claw was about to spring. He would then belittle the narrator by calling the narrator "Buster", "Nosy", "Tattle-tale", "busy-body" or "wise guy" for verbally interfering with his crimes. Despite knowing about the narrator and interacting with him, at no time does the Hooded Claw/Sneekly acknowledge that he and all the people of his world are merely characters in a scripted series. 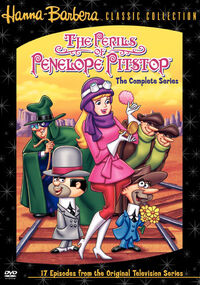