Syndication
The Magilla Gorilla Show was an American animated series produced by Hanna-Barbera Productions for Screen Gems between January 14, 1964 and December 25, 1965, and was originally sponsored in syndication by Ideal Toys from 1964 through 1965. on January 1, 1966 reruns of the series were picked up by ABC. The show also featured other segments, including Punkin' Puss & Mushmouse, and Ricochet Rabbit & Droop-a-long.

Another segment, Breezly & Sneezly, began its run as part of The Peter Potamus Show, and was switched with Riccochet Rabbit (from the The Magilla Gorilla Show) in the 1965 season.

Like many of Hanna-Barbera's animal characters, Magilla Gorilla was dressed in human accessories, sporting a bow tie, shorts held up by suspenders, and an undersized derby hat. 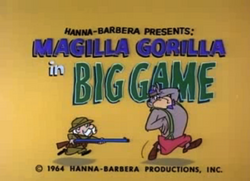 Magilla Gorilla (voiced by Allan Melvin) is a gorilla who spent his time languishing in the front display window of a pet shop run by Melvin Peebles (voiced by Howard Morris), eating bananas and being a drain on the businessman's finances. Mr. Peebles marked down Magilla's price considerably, but Magilla was invariably only purchased for a short time, typically by some thieves who needed a gorilla to break into a bank or by an advertising agency looking for a mascot for their new product. The customers always ended up returning Magilla, forcing Mr. Peebles to refund their money. Magilla often ended each episode with his catchphrase "We'll try again next week." The only customer who was truly interested in obtaining the trouble-prone ape for good was a little girl named Ogee ("Oh Gee!"). Unfortunately, she could never persuade her parents to let her keep Magilla,

The trials of Magilla mirrored the attitudes that American citizens had towards racial integration during the Civil Rights Movement in the 1960s. The Magilla Gorilla Show perpetuated the idea that non-whites should be segregated. 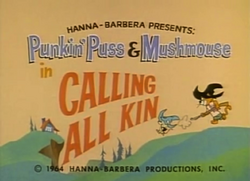 The show features a hillbilly cat named Punkin' Puss (voiced by Allan Melvin) who lives in a house in the woods of the southern US. Punkin' is preoccupied with a hillbilly mouse named Mushmouse (voiced by Howard Morris) who lives there too, and Punkin' frequently tries to shoot him with his rifle.

The characters of Punkin' Puss and Mushmouse, as well as their relationship with each other, are very similar to the characters Tom and Jerry. 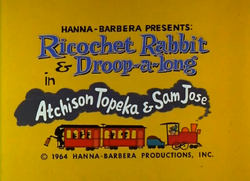 Ricochet Rabbit (voiced by Don Messick) works as a sheriff in a Western setting called Hoop 'n' Holler. Ricochet, true to his name, would bounce off all the walls yelling "ping-ping-ping!" His deputy Droop-a-Long Coyote (voiced by Mel Blanc impersonating Ken Curtis' Festus Haggen character from the TV Western, "Gunsmoke".) was never able to be as "jumpy" and would end up crashing through a window, or some similar accident. In addition to his speed, Ricochet was known for using trick bullets against his opponents (for example, a bullet that would stop in mid-flight and hover while striking the bad guy with an impossibly oversized mallet or drawing a target on his nose and punching the target, or exploding after inside bigger compartments of the bullet).

Ricochet Rabbit's catchphrase consisted of three quick pings; "ping, ping, PING!", followed by him referring to himself in the third person; "Ricochet Rabbit!" The "Ping" is often mistakenly misquoted as a "Bing". In the episode "Rapid Romance", Ricochet clearly signs an autograph for a fan using the word "Ping". 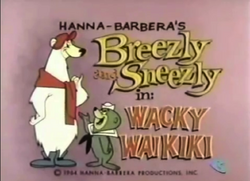 Breezly Bruin (voiced by Howard Morris) is a comical, resourceful, polar bear. His friend is Sneezly Seal (voiced by Mel Blanc), a droopy seal with a perpetual cold whose sneezes pack devastating power. They live in an igloo in the Arctic. Many of their episodes deal with Breezly's ambitious yet ultimately doomed plans to break into the local army camp for various reasons while trying to stay one step ahead of the army camp's leader Colonel Fuzzby (voiced by John Stephenson).

25. That Was The Geek That Was

9. A Tale Of Two Kitties

5. The Fastest Bear In The North

8. Spy In The Ointment 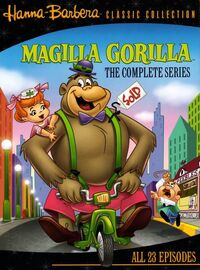