The Cartoon Network Wiki
Register
Don't have an account?
Sign In
Advertisement
in: Shows with wikis, Shows, 2000s shows,
and 21 more

The Life and Times of Juniper Lee

This show has a wiki of its own: The Life and Times of Juniper Lee Wiki.

The Life and Times of Juniper Lee

22 minutes (approx.)
Status
Abruptly cancelled
The Life and Times of Juniper Lee is an American animated television series, created by former MTV reality star Judd Winick for Cartoon Network. The show was produced by Cartoon Network Studios. It premiered on Cartoon Network on May 30, 2005, and ended its run on April 9, 2007. The show currently reruns on Pogo in India, Boing in Nigeria, South Africa, and France, Boomerang in Thailand, and Tooncast in Latin America. On April 11, 2017, it was added to Boomerang's streaming app in the United States, making it one of the few shows that are on the app that did not air on the actual Boomerang channel in the US. While it was only broadcast in full screen 4:3, Juniper Lee was the very first Cartoon Network original series to be produced in a widescreen aspect ratio of 16:9 in High Definition.

The series centers on the life of a preteen girl named Juniper Lee, who lives in Orchid Bay City. Based on Winick's adopted hometown of San Francisco, California, the city is a hub for magical activity and is filled with various monsters and demons, both good and evil. The magic and human worlds have been separated by a magical barrier, known as "The Veil", which prevents ordinary humans from seeing any magic-related events or the creatures related to them. Juniper has recently been made the new Te Xuan Ze, the protector and the keeper of the balance between the human and magic worlds. To accomplish her task, she has been magically enhanced, making her far stronger and faster than ordinary humans. She can also use various kinds of magic to assist her. Maintaining the balance often interferes with her personal life, including her schoolwork and her social life, but she always manages to keep everything flowing. The show has a fairly campy and lighthearted take on the genre, often makes fun of itself, and rarely seems to take itself seriously.

Winick has stated that Juniper Lee was inspired by both The Simpsons and Buffy the Vampire Slayer. However, Juniper does follow in the footsteps of Buffy, as stated in the quote below:

Interviewer: We've touched on just about everything else, so hit us with the high concept. Sum up the show for us… Judd: I’m sounding like a broken record, but it's kind of like Buffy the Vampire Slayer meets The Simpsons. That's the simplest way to put it. At the end of the day, it's about a little girl who fights monsters. There's a rather massive backstory to the whole thing, which really provides a spine to build from. I've only tapped into it a little in the show, but for me, knowing it's there is important. The show needs a spine, and needs a place to work from...

Juniper Lee was an NPC and nano in the MMO online game, FusionFall.

Appearances in other works

The series is available to watch on the Boomerang streaming service.

The Life and Times of Juniper Lee was added to HBO Max of Brazil on January 2022. 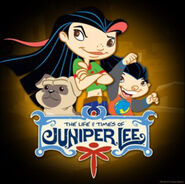 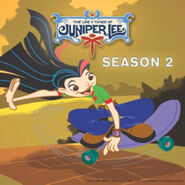 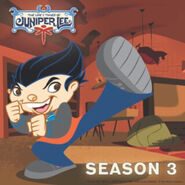 Juniper Lee as she appears in Cartoon Network Universe: FusionFall 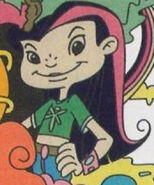 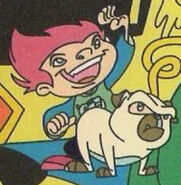 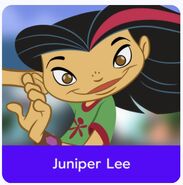 Icon on the Boomerang streaming service.