The Cartoon Network Wiki
Register
Don't have an account?
Sign In
Advertisement
in: Hanna-Barbera Series, 1950s shows, Shows,
and 3 more

22 minutes (7 minute segments)
Status
Ended
The Huckleberry Hound Show is a 1958 syndicated animated series and the second series produced by Hanna-Barbera following Ruff and Reddy, sponsored by Kellogg's. The series featured three seperate seven minute cartoon segments: one featuring Huckleberry Hound; another starring Yogi Bear and his sidekick Boo Boo; and a third with Pixie & Dixie and Mr. Jinks, two mice who in each short found a new way to outwit the cat Mr. Jinks. The Yogi Bear segment of the show proved more popular than Huckleberry's; and it spawned its own series in 1961, The Yogi Bear Show. A segment featuring Hokey Wolf and Ding-A-Ling was added, replacing Yogi Bear during the 1960–61 season. In 1961, the series became the first animated program to be honored with an Emmy Award. The Huckleberry Hound Show contributed to making Hanna-Barbera a household name, and is often credited with legitimizing the concept of animation produced specifically for television.

Most of the Huckleberry Hound segments consisted of Huck trying to perform jobs in different fields, ranging from policeman to dogcatcher, with results that backfired, yet he usually ended up coming out on top, either through slow persistence or sheer luck. Huck did not seem to exist in a specific time period as he has also been a Roman gladiator, a Medieval knight, and a rocket scientist. He never appeared in futuristic cartoons, only those set in the present or the past. 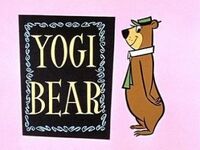 Yogi Bear and his friend Boo Boo Bear live in Jellystone Park and occasionally try to steal picnic baskets while evading Ranger Smith. Yogi also has a relationship with his girlfriend Cindy Bear.

Pixie and Dixie and Mr. Jinks

The show featured two mice, Pixie and Dixie, and a cat, Mr. Jinks. In many ways the shorts resemble Hanna-Barbera's earlier better-known creation, Tom and Jerry, which also featured a warring cat and mouse (sometimes two) in a domestic setting. However without Tom and Jerry's more lavish budget for full animation, the Jinks team had to rely on funny dialogue and voices to carry the cartoon's humor. The cartoon was also less violent, and unlike the slightly sinister Tom, the headstrong Jinks was, in reality, too dense to pose much of a real threat to the mice. Unlike Tom and Jerry, there were many more times when Jinks would either share a good ending with the mice or actually outwit them himself, whereas the times Tom got the best of Jerry were much more rare.

The initial creation of Hokey Wolf occurred when another follow-up segment was needed, because Yogi Bear's rising popularity in preceding appearances warranted a promotion to his own self-titled show.[1] As a result of the change in schedule, Hokey Wolf had made its debut in the premiere of the third season of The Huckleberry Hound Show on September 11, 1960 and became a regular appearance afterward on this segment.

The segment follows the everyday misadventures of its main protagonist, Hokey Wolf, and his young companion, Ding-A-Ling, as they go through their typical con-artist routines of getting what they need in their daily lives. Through each episode, Hokey would usually try to fool farmers and other antagonists with food-stealing schemes and/or finding a place to stay without cost, only for most of these tricks to back-fire on him in one way or another.

Huckleberry Hound - Huckleberry "Huck" Hound (portrayed by Daws Butler) is a blue dog that speaks with a Southern drawl and has a relaxed, sweet, and well-intentioned personality. Huckleberry Hound's southern drawl and laid back mannerisms bear close resemblance to the character "Southern Wolf" in the MGM cartoons including those produced by Hanna and Barbera. The term "huckleberry" can be a slang expression for a rube or an amateur, or a mild expression of disapproval.

Yogi Bear - Yogi bear was portrayed by Daws Butler, like many Hanna-Barbera characters, Yogi's personality and mannerisms were based on a popular celebrity of the time. Art Carney's Ed Norton character on The Honeymooners was said to be Yogi's inspiration; his voice mannerisms broadly mimic Carney as Norton. Norton, in turn, received influence from Borscht Belt and comedians of vaudeville.

Yogi's name is commonly seen as a nod to the famed baseball star Yogi Berra. The plot of most of Yogi's cartoons centered on his antics in the fictional Jellystone Park, a takeoff on the famous Yellowstone National Park. Yogi, accompanied by his constant companion Boo-Boo Bear, would often try to steal picnic baskets from campers in the park, much to the displeasure of Park Ranger Smith.

Boo-Boo Bear - Yogi's constant companion, Boo-Boo (voiced by Don Messick) is portrayed as an anthropomorphic bear cub wearing a purple bow tie. Boo-Boo often acts as Yogi Bear's conscience. He tries (usually unsuccessfully) to keep Yogi from doing things he should not do, and also to keep Yogi from getting into trouble with Ranger Smith. Often he would say "But Yogi, Mr. Ranger isn't gonna like this," or some variation. It is not readily apparent whether Boo-Boo is a juvenile bear with a precocious intellect or simply an adult bear who is short of stature.

Mr. Jinks - Mr. Jinks (also voiced by Daws Butler) is an orange cat with a blue bowtie who constantly chases Pixie and Dixie, of whom he routinely said, "I hate meeces to pieces!" Even though Jinks often chases Pixie and Dixie he is also shown to have a soft spot for them, evident in episodes such as "Strong Mouse", "The Pushy Cat" and "Mouse Nappers". In the episode "Jinks Jr." Jinks is shown to not fully understand why he chases them, only that "cats are supposed to hate meeces". Even so, Jinks doesn't usially mean them any real harm, for example in the episode "The Ghost With The Most" Dixie pretended he was dead after Jinks clobbers him, and Jinks is shown to be very remorseful, even partially traumatized.

Hokey Wolf - Hokey is voiced by Daws Butler and based on Phil Silvers' "Sgt. Bilko" character. He is the smooth-talking title character throughout each cartoon. His main hobby in life is to outsmart and coax the clueless out of free meals or places to stay, which he seemed to do with ease, despite possible consequences later on. Hokey typically wears his trademark green bow tie with white collar and a violet-colored hat.

Ding-a-ling - Ding-A-Ling (voiced by Doug Young imitating Buddy Hackett) is the younger sidekick to Hokey Wolf who always accompanies him throughout each misadventure. He is usually eager to follow in Hokey's ambitious con-artist footsteps, but often reconsiders the plans Hokey will come up with in many situations. Ding typically wears a bowler hat (sometimes red, sometimes black), a sleeveless green shirt, and a black vest. 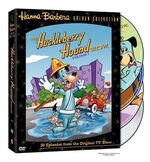 On November 15, 2005, Warner Home Video released The Huckleberry Hound Show – Vol. 1 for the Hanna-Barbera Classics Collection, featuring the complete first season of 26 episodes (66 segments) from the series on DVD. As of July 2012, there is no news of releasing the other 42 episodes (112 segments) on DVD. Also on DVD are, the Huckleberry Hound Short "Spud Dud" and Pixie and Dixie Short "Heavens To Jinksy". These are available on the DVD Cartoon Network Cartoon Crack Ups. This is the only way to get these two episodes.