The Cartoon Network Wiki
Register
Don't have an account?
Sign In
Advertisement
in: Shows, 1960s shows, Hanna-Barbera Series,
and 3 more

22 minutes (approx.)
Status
Ended
The Herculoids is an American Saturday-morning animated-cartoon television series, created and designed by Alex Toth, that was produced by Hanna-Barbera Productions. The show debuted on September 9, 1967 on CBS. Hanna-Barbera produced one season for the original airing of the show, although the original 18 episodes were rerun during the 1968–69 television season, with The Herculoids ending its run on September 6, 1969. Each episode consisted of two seperate Herculoids segments.

Eleven new segments were produced in 1981 as part of the Space Stars show. The plotlines are rooted in science fiction, and have story direction and content similar to Jonny Quest and Space Ghost. This series is set on the distant planet Amzot (renamed Quasar in the Space Stars episodes). The name "Amzot" was first mentioned in the Space Ghost episode "The Molten Monsters of Moltar" (in which the Herculoids made a brief guest appearance).

The Herculoids battled to defend their planet from menaces on Amzot/Quasar and from outer space. All of the Herculoids displayed Human-level intelligence--employing precision teamwork and complex tactics--as well as emotions, and Zandor and Tara both displayed a working knowledge of complex alien technologies as well as the ability to pilot interstellar spacecraft.

But essentially, Zandor, Tara, Dorno, and the Herculoids were all apparently fighting to keep Amzot/Quasar a technology-free, primitive planet. This is further indicated by the pseudo-barbarian outfits of Zandor, Tara, and Dorno and the fact that technology was used mainly by the various villains, but rarely if ever by the heroes.

Although the "speech" of their companions was limited and repetitive, Zandor, Tara and Dorno demonstrated that Gloop and Gleep, at least, had a comprehensive mode of communication, and that they could at least understand and interpret this language (c.f. "The Mutoids:" "Gleep says that the aliens who landed are attacking Dorno and Tundro"). The "voices" used in the shows were actually brief tracks supplied by two actors and reused throughout the series, in keeping with Hanna-Barbera's thrifty ethos.

A number of episodes featured alien invaders who came to Amzot/Quasar to seek revenge against Zandor for an unspecified battle or adventure from the past. All were apparently technocratic, and the aliens's grudges seemed to basically boil down to them being stymied in their attempts at bringing technology to Amzot/Quasar, which the apparently primitivistic Zandor wanted to avoid.

In some of the seasons, the episodes opened with the following narration: "Somewhere out in space live The Herculoids...Zok the laser-ray dragon! Igoo the giant rock ape! Tundro the tremendous! Gloop and Gleep, the formless fearless wonders! With Zandor their leader, and his wife, Tara, and son, Dorno, they team up to protect their planet from sinister invaders! All-strong! All-brave! All-heroes!! They are The Herculoids!!!"

The three humanoid characters were the only ones who could communicate in English.

Zandor (voiced by Mike Road) is the protector of Amzot/Quasar and leader of The Herculoids.

Dorno (voiced by Ted Eccles in the original series, Sparky Marcus in 1981) - Son of Zandor and Tara. Despite being their son, he still refers to them by their first names, rather than "Mother" and "Father." However this changed in the 80's revival of the series.

Zok (voiced by Mike Road) is a flying space dragon. He can emit laser beams from his eyes and tail. His eyes also produce a "nega-beam" that can neutralize certain energy attacks. Zok can survive in space unaided, is capable of interstellar travel, and can breathe fire.

Igoo (voiced by Ted Cassidy) is a rock ape. An extremely large and powerful simian, he has extremely dense rock-like skin and is nearly invulnerable to harm. In one episode, Igoo wades through a pond of molten lava. Igoo has a great fondness and devotion for Tara, and would do anything for her.

Tundro (voiced by Mike Road) is a ten-legged, four-horned rhino/triceratops hybrid. He can shoot explosive energy rocks from his cannon-horn (Zandor, Tara, and Dorno also occasionally shoot similar rocks with slingshots). His natural armor-plating is exceptionally strong, similar to Igoo's rock skin. His legs have the ability to extend to a remarkable length, somewhat like stilts. He can also spin his head at blinding speed, allowing him to drill through solid rock, and has the ability to make magnificent leaps.

Gloop and Gleep (both voiced by Don Messick) are two protoplasmic creatures. They are able to absorb and deflect energy blasts and laser beams, often placing themselves between attackers and other Herculoids to act as shields. They can also form shapes including, but not limited to: cushions, trampolines or parachutes to break falls; stretching themselves between tree limbs or rocks to act as slingshots; encircling an attacker's limbs to restrain them, or the entire body to squeeze and render them unconscious. Gloop is the larger of the two.

The original series consisted of 18 episodes consisting of 2 segments each for a total of 36 segments. It ran from September 9, 1967 - January 6, 1968. In 1981 the series was revived and 11 new segments were made and aired as part of Space Stars. 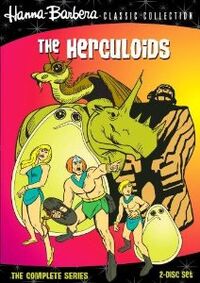 On June 14, 2011, Warner Archive released The Herculoids: The Complete Original Animated Series on DVD as part of their Hanna–Barbera Classics Collection. This is a Manufacture-on-Demand (MOD) release, available exclusively through Warner's online store and Amazon.com.