The Cartoon Network Wiki
Register
Don't have an account?
Sign In
Advertisement
in: Hanna-Barbera Series, 1960s shows, Shows older than the network,
and 2 more

Fifty-two episodes were produced for each of the three segments. The series was distributed to television stations as separate individual cartoon segments, each with its own opening theme and closing title. The title The New Hanna-Barbera Cartoon series was an off-screen promotional title to distinguish this series from other packages of Hanna-Barbera cartoons (such as Ruff and Reddy, The Huckleberry Hound Show and The Yogi Bear Show) available at the time. For example, WGN-Channel 9 in Chicago ran the three segments in a half-hour timeslot under the name Wally Gator. In New York, WPIX-TV originally used the segments for a local series, Cartoon Zoo, featuring Milt Moss as host and "Zookeeper", with life-sized cutouts of the characters in "cages" as a backdrop.

The series was originally syndicated by Screen Gems, the TV division of Columbia Pictures. The Hanna-Barbera studio was later purchased by Taft Broadcasting Company, which distributed the studio's product first through Taft-HB Program Sales, and later through Worldvision Enterprises. Over time, the studio regained control of many of its earlier productions and distributed them through Worldvision. The elements of The New Hanna-Barbera Cartoon Series were split up, with Wally Gator airing as a segment on Magilla Gorilla and Friends on USA Network's "Cartoon Express" from 1987 through 1991. Meanwhile, Touche Turtle and Lippy the Lion were part of another package of cartoons aired on the Family Channel. Following the purchase of the Hanna-Barbera library by Turner Entertainment, these shorts eventually appeared on Cartoon Network (1992-2000) and later Boomerang.

Wally Gator (voiced by Daws Butler impersonating Ed Wynn) is an anthropomorphic Cajun alligator. He is most comfortable when he is at home in the city zoo, but sometimes wanders out into the real world. Mr. Twiddle (voiced by Don Messick) is the zookeeper who keeps a close watch on Wally because sometimes he escapes to check out what things are like outside the zoo. 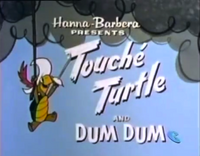 Touché Turtle (voiced by Bill Thompson) is a swashbuckling hero who doesn't appear very formidable. Brandishing his trusty sword, he travels the land with his simpleminded assistant, Dum Dum the dog (voiced by Alan Reed), protecting innocent folks from dragons, evil knights, and the occasional robot. When he comes across someone in need of rescue, the daring turtle raises his battle cry, "Touché away!" and races into action. 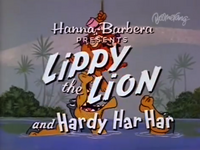 Lippy the Lion (voiced by Daws Butler) and Hardy Har Har the Hyena (voiced by Mel Blanc) first appeared in The Hanna-Barbera New Cartoon Series in 1962, along with Wally Gator and Touché Turtle and Dum Dum. Mel Blanc used the same voice, personality and expressions for Hardy Har-Har that he used playing the postman on the Burns and Allen radio show. Hardy's name is ironic, as it suggests laughter and Hardy is an eternal pessimist.

Their cartoons revolved around ever-hopeful Lippy's attempts to get rich quick, with reluctant Hardy serving as a foil. Whatever the consequences were to Lippy's schemes, Hardy would end up getting the worst of it — a fact he always seemed to realize ahead of time, with his moans of, "Oh me, oh my, oh dear." Although the intro shows them in a jungle setting proper for such beasts, most of the cartoons' stories took place in an urban setting.

Several segments from The Hanna-Barbera New Cartoon Series were put on DVD with Saturday Morning Cartoons: Vol. 2. Strangely, the Lippy the Lion cartoon was of noticeably better quality than the other two on the DVD.