The Grim Adventures of Billy & Mandy

The Grim Adventures of Billy and Mandy

22 minutes
Status
Concluded
The Grim Adventures of Billy & Mandy is an American animated television series that originally aired as a segment series on August 24th, 2001 along with Evil Con Carne in the series, Grim and Evil. The show officially aired as a stand alone series on June 13, 2003 and ended on November 9th, 2007.

A film titled Underfist aired on October 12, 2008 and was originally intended to be the pilot of a planned spin-off to The Grim Adventures of Billy & Mandy, but due to Atoms contract expiring it was never made into a series.

The series is about a dimwitted boy named Billy and his cynical, merciless friend, Mandy, who befriend a Grim Reaper after he lost in a limbo contest.

Originally premiered on March 30th, 2007, the movie revolves around Billy and Mandy helping Grim to get his job back.

Billy and Mandy: Wrath of the Spider Queen

Originally premiered on July 6th, 2007, the movie revolves the Spider Queen getting her revenge on Grim because she was supposed to be the Reaper

Originally premiered of October 12th, 2008, the movie revolves Hoss Delgado, General Skarr, Fred FredBurger, Jeff the Spider, and Irwin teaming up with each other to defeat an evil army of chocolate bar monsters by an evil marshmallow bunny. The movie was meant to be the Pilot for a Billy and Mandy spin off series but never got off the ground when Maxwell Atoms expired his contract with Cartoon Network.

In 2021, Maxwell Atoms pitched to Cartoon Network a new reboot film that would serve as the true series finale, titled Billy & Mandy Destroy Us All: A Cosmic Horror Musical. However, he then revealed in September that the network rejected the film becaused it felt the modern audience had no knowledge of the franchise, in spite of the series being avaliable on the HBO Max platform, excluding the fact that not the entirety of the franchise is avaliable there. [1]

The Complete First Season of The Grim Adventures of Billy and Mandy was released on DVD on September 18th, 2007.

All 6 seasons of the series are available on iTunes and Amazon Prime, with the exceptions of Billy and Mandy Save Christmas and Billy and Mandy's Big Boogey Adventure due to music licensing issues. The spinoff pilot Underfist: Halloween Bash is unavailable everywhere, as it was rarely seen after its broadcast in 2008.

Appearances in other works

Mandy appeared in the Foster's Home for Imaginary Friends episode, The Big Picture.

In an episode of Ben 10, there was an alien character known as a Maxomatar whose design resembles Billy.

Billy and Mandy's names appeared on a list in the Steven Universe and Uncle Grandpa crossover episode, Say Uncle.

Billy made a cameo appearance in the Uncle Grandpa episode, Pizza Eve.

Grim had a cameo appearance in the OK K.O.! Let's Be Heroes episode, Crossover Nexus, where his two roles were to be one of the Cartoon Network heroes that were turned into stones by Strike and one of Ben 10's transformations to defeat Strike himself. He also had another cameo in the episode, Monster Party.

A Grim Adventures of Billy and Mandy skit was featured in an episode of the Adult Swim series, Robot Chicken. 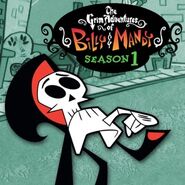