The Funky Phantom is a Saturday morning cartoon, co-produced by Hanna-Barbera Productions and Australian production company, Air Programs International in 1971 for ABC. The series later appeared in reruns on USA Network during the 1980s and on Cartoon Network from 1992-2000. In 2000, The series began airing on Cartoon Network's sister channel Boomerang.

Similar to Hanna-Barbera's successful Scooby-Doo, Where Are You!, The Funky Phantom featured three teenagers — Skip, April and Augie — and their dog Elmo. While trying to get out of a storm when driving the Looney Duney, they entered an old house where the longcase clock was wrong. Upon setting the clock to midnight, it released two ghosts: a Revolutionary War-era ghost named Jonathan Wellington "Mudsy" Muddlemore and his cat, Boo. The two stumbled upon two Redcoats and ended up hiding inside the clock during the Revolutionary War, but then couldn't get out and eventually died inside. Ever since being freed by their new friends, Mudsy and Boo have accompanied them on many mysteries, always giving an invisible helping hand.

The voice of Mudsy was provided by Daws Butler and was identical to his voice work for the character Snagglepuss, down to the use of Snagglepuss's catchphrases, Even. (In turn, that voice was an impersonation of actor Bert Lahr.) 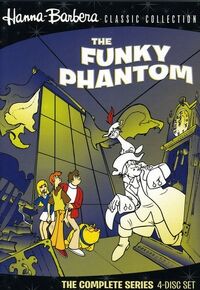 On October 26, 2010, Warner Archive released The Funky Phantom: The Complete Series on DVD in region 1 as part of their Hanna–Barbera Classics Collection. This is a Manufacture-on-Demand (MOD) release, available exclusively through Warner's online store and Amazon.com.