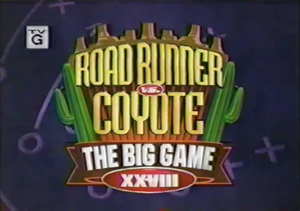 The Big Game XXVIII: Roadrunner vs. Coyote was a 4-hour marathon that aired on Cartoon Network on Saturday, January 29, 2000, from 6:00 PM to 10:00 PM, with the first hour consisting of a pre-game show that featured analysis by experts Jerry Glanville, Nick Buoniconti, Cris Collinsworth and Len Dawson as well as narration by Harry Kalas. The marathon featured 18 Looney Tunes shorts starring the Roadrunner and Wile E. Coyote as well as play-by-play and color commentary from Pat Summerall and John Madden during commercials. The marathon also featured segments with Scott Hamilton and Bubba Smith providing sideline reports from Chuck Jones Stadium, and Jack Hanna offering a zoological breakdown of the two competitors. The marathon was also aired the following day (Super Bowl Sunday) from 1:00 PM to 5:00 PM.[1]

This was the third in a series of four Super Bowl spoof marathons that aired annually on Cartoon Network from 1998-2001. These marathons came to be known as "The Big Game"; however, only the final two actually featured this moniker.

The game itself used clips from the following Road Runner cartoons:

Retrieved from "https://cartoonnetwork.fandom.com/wiki/The_Big_Game_XXVIII:_Roadrunner_vs._Coyote?oldid=101543"
Community content is available under CC-BY-SA unless otherwise noted.