The Cartoon Network Wiki
Register
Don't have an account?
Sign In
Advertisement
in: Shows, 1960s shows, Hanna-Barbera Series,
and 16 more

44 minutes (approx.)
7 minute segments (approx.)
Status
Ended
The Atom Ant/Secret Squirrel Show was an hour-long Saturday morning cartoon produced by Hanna-Barbera Productions from 1965 to 1966 for NBC. Atom Ant and Secret Squirrel aired in reruns independently of each other for the first part of the 1966–1967 season: Precious Pupp and The Hillbilly Bears aired as segments on The Atom Ant Show, while Squiddly Diddly and Winsome Witch aired as segments on The Secret Squirrel Show before recombining into the hour-long format in the winter.

The Hillbilly Bears cartoon segments were later repeated during the second season of The Banana Splits Adventure Hour (1969–1970), and all 26 Atom Ant (containing Atom Ant, Precious Pupp, Hillbilly Bears) and 26 Secret Squirrel (containing Secret Squirrel, Squiddly Diddly, Winsome Witch) half-hour shows were syndicated as part of The Banana Splits and Friends Show, an umbrella title for a package combining episodes of several different Hanna-Barbera series (the other series included The Banana Splits Adventure Hour, The New Adventures of Huckleberry Finn, and The Adventures of Gulliver). 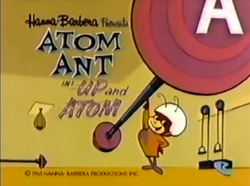 Atom Ant (originally voiced by Howard Morris, then by Don Messick in later episodes) operated out of an anthill in the countryside, where he possessed such things as a mainframe computer and exercise equipment. His powers mostly consisted of the ability to fly, superspeed, incredible strength, and invulnerability. His catchphrase was "Up and at 'em, Atom Ant!"

He was often contacted by the police, who sent him out on an assignment. Some of these missions parodied those of Batman. The police force was constantly shown to be underfunded and inept, as they relied on Atom Ant to do all their police work. The only two police officers were the chief and deputy chief. The department only possessed one rusted patrol car. Atom Ant fights various villains including recurring ones like Ferocious Flea (voiced by Don Messick) and mad scientist Professor Von Gimmick. 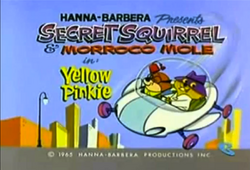 The adventures of a secret agent squirrel (voiced by Mel Blanc) who is assisted in his adventures by his fez-wearing sidekick Morocco Mole (also voiced by Paul Frees impersonating Peter Lorre). The pair fights crime and evil enemy agents using cunning and a variety of spy gadgets, including a machine gun cane, a collection of guns kept inside Secret's trench coat, and a variety of devices concealed in his fedora (which he almost never removes).

Secret Squirrel's shorts were a parody of the then-popular spy genre, with most of his shorts' elements satirizing those of the James Bond films. Secret Squirrel was also known as "Agent 000". Beginning in 1993, thirteen new Secret Squirrel cartoons appeared in between the 2 Stupid Dogs episodes, with the updated title, Super Secret Secret Squirrel and a new cast. 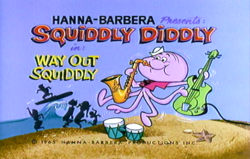 A cartoon about a friendly, sailor hat wearing, anthropomorphic squid (voiced by Paul Frees), more octopus than squid in appearance, who is captive in an aquatic park known as Bubbleland, and resides in a pool with his name on it. Squiddly Diddly is an aspiring musician who makes many attempts to escape and attain musical stardom but is constantly foiled by Bubbleland's administrator Chief Winchley (John Stephenson).

In some episodes Squiddly Diddly manages to escape but chooses to return to Bubbleland, considering the outside world to be too harsh. Other times Squiddly and Chief Winchley would have to work together to deal with those who were problematic to Bubbleland. The cartoons sometimes show people applauding Squiddly Diddly's musical talents but often depict terrified people who mistakenly believe that octopuses are hostile. 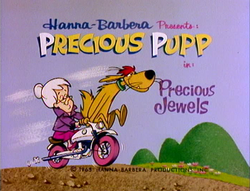 A cartoon about Precious Pupp (voiced by Don Messick), a large, mangy dog, and his elderly owner, Granny Sweet (voiced by Janet Waldo). Granny was a kindly woman with a passion for motorcycles, completely oblivious to the fact that her beloved, affectionate pet was something of a neighbourhood terror. He had a habit of slipping behind a victim quietly---sometimes in defense of their home, sometimes just for the fun of it---and jolting him with a ferocious series of barks . . . but never where or when Granny could catch him in the act. Unlike many cartoon animals, Precious didn't speak. His usual vocalism was an asthmatic-sounding, "wheezing" laugh used even more famously by Muttley, a Hanna-Barbera character introduced three years later in Wacky Races. 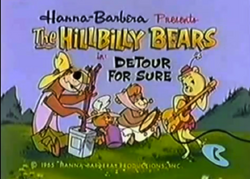 The Hillbilly Bears played on a social stereotype of the "hillbilly", with a gun toting, mumbling father Paw Rugg who was always "feudin" ("feudin" was usually a lethargic operation, in which the protagonists fired the same bullet back and forth from the comfort of their rocking chairs) with the neighbors the Hoppers.

Paw Rugg's voice was a mumble, splattered with a few understandable words. Particularly in the first episodes, Paw Rugg's voice was incomprehensible; his speech improved with the later episodes. His wife Maw was a homemaker who appeared as the more levelheaded parent, The fur of his daughter Floral had lemon-colored fur (as opposed to the darker-colored fur of Maw, Paw and Shag) and Floral was the southern belle and most sophisticated member of the family while Shag was a troublemaker who looks up to his father. 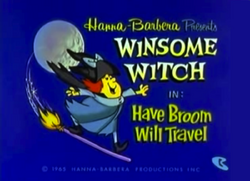 A cartoon about a friendly, yet somewhat inept, witch named Winsome Witch (voiced by Jean Vander Pyl). Winnie's catch phrase when casting a spell was "Ippity - Pippity - Pow!" (when the magic spell conjures, the Jet Screamer entrance cue from The Jetsons, is heard). She often flies around on a broom that happens to be magically alive.

8. Fastest Ant In The West

19. Nine Strikes You're Out

7. Robin Hood And His Merry Muggs

3. The Canvas Back Squid

8. Squid On The Skids

4. Queen Of The Road

5. Crook Out Cook Out

21. A Grapple For The Teacher

5. Goldilocks And The Four Bears

1. Have Broom Will Travel

10. Have Broom Will Zoom