The Amazing World of Gumball

This show has a wiki of its own: The Amazing World of Gumball Wiki.

The Amazing World of Gumball

11 minutes (approx.)
Status
Rerunning, movie on work and soon have new Series.
The Amazing World of Gumball is a British-American animated sitcom created by Ben Bocquelet for Cartoon Network.[1] Produced by Cartoon Network Development Studio Europe, it first aired on May 3, 2011, and ended on June 24, 2019.[2] The series revolves around the lives of 12-year-old Gumball Watterson, a blue cat, and his goldfish best friend and adoptive brother 10-year-old Darwin, who attend middle school in the fictional city of Elmore, California. They frequently find themselves involved in various shenanigans around the city, during which time they interact with fellow family members—younger sister Anais, mother Nicole, and father Richard—and an extended supporting cast of characters.

Bocquelet based several of the series' characters on rejected characters from his previous commercial work and making its premise a mixture of "family shows and school shows", which Cartoon Network was heavily interested in. He pitched The Amazing World of Gumball to the network and Turner Broadcasting executive Daniel Lennard subsequently greenlit the production of the series. It is the first series to be produced by Cartoon Network Studios Europe (also known as Great Marlborough Productions, Inc. and formerly known as Cartoon Network Development Studio Europe), and it is produced in association with Boulder Media Limited in Ireland and Dandelion Studios for Season 1 and Studio SOI in Germany from Season 2 onward.

The series has made multiple stylistic changes throughout its production, specifically in the transition between its first and second seasons. Such changes include character redesigns, an increase in the use of VFX, higher quality animation, a hidden storyline involving the Void and a shift towards a much darker, more satirical comedic style.

Bocquelet would state on September 6, 2016, that the sixth season would be his last time working on the show and that production could continue without him. 2 years later, on October 7, 2018, he retweeted a blog post from RegularCapital stating that the 6th season will be the last, though the author would make a follow-up post saying that more seasons are possible according to Turner Northern Europe.[4] Following the 6th season, a 6-episode miniseries titled Darwin's Yearbook was announced for the series in November 2019, followed by another miniseries called The Gumball Chronicles in October 2020.[5][6]

On February 17, 2021, Cartoon Network announced on Twitter that an Amazing World of Gumball film was in development.[7]

On September 21, 2021, Cartoon Network announced that the upcoming film of The Amazing World of Gumball has been officially greenlit, along with a new Gumball series. The movie and new series would be coming soon onto Cartoon Network and HBO Max.[8]

When Cartoon Network Development Studio Europe was created in 2007, Ben Bocquelet was hired in order to help people pitch their projects to the network. However, when the studio decided to have its employees all pitch their own ideas, he decided to take some of the rejected characters he had created for commercials and put them all in one series, with a school setting. Daniel Lennard, the Vice President of Original Series and Development at Turner Broadcasting UK, liked the idea and the series was ultimately greenlit.

Gumball Watterson: He is the main protagonist of the series. A male 12-year-old trouble-making cat who repeatedly does idiotic things but never learns his lesson. He can get really angry at some points. He has an unbearable crush on Penny, the (formerly) antlered peanut, and the (currently) shape-shifting fairy, and once after cracking her shell open, they started dating. Despite his rambunctious behavior, he can be loyal, serious and often kind-hearted. He is often victim of circumstance.

Darwin Watterson: Gumball's 10-year-old best friend and brother. More naive than anyone else in the series, and has a tendency to have moments of smartness. Loyal to Gumball, despite Gumball being a negative influence on him at times.

Anais Watterson: A prodigy at 4 years old, she is a rabbit who is considered to be the youngest and smartest member on the family, often being called a genius and attending school with her much older brother. Gumball resents the fact that she is always telling him what to do, but deep down, he actually loves her, and knows she's always right. Although impatient with her brother, she often tags along with him on his misadventures as a voice of reason. She also helps Gumball out of any situation.

Nicole Watterson: A 38-year-old workaholic cat mother, who also works long hours cleaning the house, she is the only responsible member of the family aside from Anais. She has a short temper and can get quite angry, and is also competitive by nature. She often acts like a guide when Gumball and Darwin get in a tough spot with their misadventures. She often gets over-stressed. In addition she is very protective of her family.

Richard Watterson: A big rather overweight 38-year-old rabbit stay-at-home dad. Richard Watterson tends to give off signs that he no intelligence or responsibility, and most likely might get into mayhem a couple times. His usual daily routine is sleeping, eating, and usually generally slacking off and being lazy. Might not get dressed sometimes. Richard also eats a lot, possessing an extreme appetite. In addition he is just the third wheel in his sons misadventures. However despite all of Richards faults, he is a very caring, loving dad.. His favorite child in the family is Darwin. He's also a fan of fantasy related things. Example; he is in a club that pertains to fantasy and playing a Dungeons and Dragons styled roleplaying game.

Lawrence "Larry" Needlemeyer: Store clerk who has worked in every store in Elmore. The Wattersons often cause trouble in his workplaces. The world can't survive with him jobless.

Bobert: A robot; goes to school, is friends with Gumball and Darwin. He often seeks life lessons from Gumball and Darwin. Bobert also happens to have a powerful, destructive array of built in weaponry, and can transform into a bigger, more combat suited version of himself. In addition, Bobert can be eccentric, and has no emotion.

Tina Rex: A female talking dinosaur who tends to be more on the havoc causing side for Gumball and Darwin. But under it all, Tina is an upright girl who's mainly misunderstood. After Season 1, she and Gumball became friends.

Penny Fitzgerald: A shapeshifting creature and Gumball's girlfriend. She used to be an antlered peanut up to the events of "The Shell" when with the help of Gumball, she broke free out of her shell. Gumball had a crush on her for a long time, and he finally confessed his feelings to her in "The Shell" and they started dating.

Tobias: A multi-colored cloud-like creature. He thinks that he is a cool Jock and a smooth ladies man while he is the opposite. He is also spoiled rotten by his very wealthy parents. Tobias and Gumball has a bit of a rivalry, both fighting for Penny's love in "The Knights". He has a sister named Rachel, who doesn't like immature "old babies" like the people Tobias hangs out with.

Banana Joe: A hyperactive talking banana who enjoys fun, and cracking jokes, the class clown of Elmore Junior High. He is always jokes about whatever he can, whenever he can, without realizing that the joke is usually on him. Joe is quite restless and dim-witted, which usually leads to him getting hurt in some heinous way. Joe is mostly seen hanging out with Tobias, and the two sometimes hang out with Gumball and Darwin. Banana Joe is prone to becoming sliced or smashed, since he is a banana, although he goes back to his regular self and shape afterwards.

Leslie: A pink daisy who is gentle and friendly. He is very effeminate and can usually be found hanging around the girls. Leslie plays the flute in the school band, and is really good at it. He is also Penny’s cousin as revealed in “The Flower” as Gumball was jealous when Penny started hanging out with Leslie.

Idaho: A country potato with old-fashioned beliefs. He seems to be quite simple minded, and is one of the less popular students of Elmore Junior High. Like Banana Joe and Anton, Idaho is usually seen being injured in some fashion.

Mr. Small: A tall, fluffy creature who is the counselor of Elmore Junior High. He is interested in New Age culture and can also be considered a bit of a hippie. Mr. Small's strange and unorthodox teaching methods are usually more confusing to the children than helpful, and most of the kids leave his office confused and no better off than they were previously.

Miss Simian: A baboon who is Gumball and Darwin's sadistic teacher. She takes great pleasure in giving her students pop quizzes and being generally unpleasant, which is somewhat justified by the fact that she has been teaching for over 300,000 years. She is madly in love with Principal Brown, and he seems to gladly return the feeling. Miss Simian utterly despises Gumball and will do anything to ruin his mischievous plans.

Rocky Robinson: A puppet who holds a variety of jobs he does around Elmore Junior High. Rocky is the son of Mr. and Mrs. Robinson and is probably the dumbest adult in Elmore (sharing the title with Richard). However despite being dumb, he is one of the most kindest, nicest people in the entire show. Even saying he likes everyone, except Miss Simian.

Carrie: An emo ghost who is quite depressed at times. She was born a ghost, so she was never actually alive. She sometimes helps Gumball and Darwin when they need supernatural help. She seems to care about them very much as she is always looking out for them. She and Darwin have romantic-interest in each other, but none have confessed to the other, until "The Matchmaker", where they kissed.

Masami: A cloud creature who is spoiled rotten by her parents. Masami is used to getting whatever she wants, and takes it for granted. Masami usually resorts to lying to impress her friends or get what she wants. For instance, on one occasion she pretended to be Darwin's girlfriend in order to impress the other girls. At times she is kind hearted and helps Gumball and Darwin when they need it.

Rob: Gumball and Darwin's arch enemy. He used to be an Elmore Junior High student up until the world realized that he was a mistake and sent him to the void. Gumball, Darwin and Mr. Small. visited the void to save one other classmate, but they didn't save Rob. He hopped on the back of Mr. Small's car and escaped the void. He ultimately became deformed as the effect of leaving to void. He swore to destroy Gumball and everyone he loved for not saving him and nearly did with the help of The Universal Remote in the Season 4 finale, "The Disaster". He ultimately forgave Gumball in the Season 5 premiere "The Rerun" after Gumball saved him from the void in the last battle scene.

For more information about this section, visit: The Amazing World of Gumball/Episodes 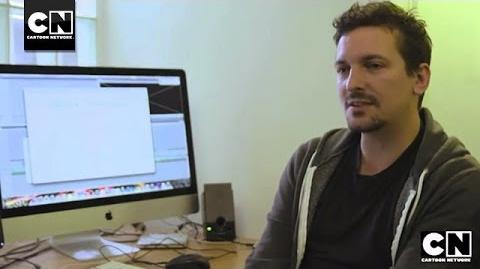 Behind the Scenes The Amazing World of Gumball Cartoon Network