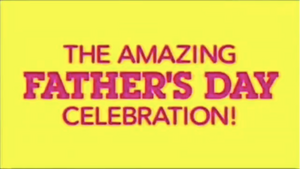 The Amazing Father's Day Celebration! is a Father's Day marathon that aired on Cartoon Network on Sunday, June 18, 2017. The marathon featured episodes of The Amazing World of Gumball and was billed as featuring Richard's best episodes, as well as a new episode of The Powerpuff Girls at 5:30pm. The marathon was similar to The Amazing Mother's Day Celebration! which aired a month earlier.
Retrieved from "https://cartoonnetwork.fandom.com/wiki/The_Amazing_Father%27s_Day_Celebration!?oldid=96278"
Community content is available under CC-BY-SA unless otherwise noted.