The Cartoon Network Wiki
Register
Don't have an account?
Sign In
Advertisement
in: Hanna-Barbera Series, 1970s shows, Shows older than the network,
and 2 more

22 minutes
Status
Ended
The Addams Family is an animated adaptation of the Charles Addams cartoons produced by Hanna-Barbera Productions in 1973. Many of the original actor's from the 1960"s television series returned in voice-over roles, but a young Jodie Foster provided the voice of Pugsley. Then a young actress working in shows like Gunsmoke and The Courtship Of Eddie's Father, she is now best known for her roles in films like Silence Of The Lambs and Maverick.

In 1973 the characters returned in their own series. In a departure from the original series, this series took the Addamses on the road in a Victorian-style RV. This series followed the relationships of the original Addams cartoons in that Fester is Gomez' brother, and Grandmama is Morticia's mother. Many cast members from the original series and the Scooby-Doo episode reprise their roles in the series, with the exceptions of Astin and Jones. The show also introduces the Addams Family's animal companions Ali the Alligator and Ocho the Octopus.

1. "The Addams Family in New York"

4. "The Fastest Creepy Camper in the West"

8. "The Reluctant Astronauts' Trip to the Moon"

16. "The Addams Family at the Kentucky Derby" 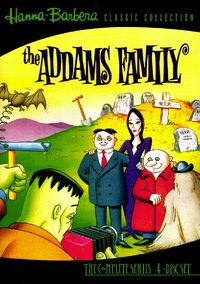 On October 19, 2010, Warner Archive released The Addams Family: The Complete Series on DVD in the United States as part of their Hanna–Barbera Classics Collection. This is a Manufacture-on-Demand (MOD) release, available exclusively through Warner's online store and Amazon.com.