The Cartoon Network Wiki
Register
Don't have an account?
Sign In
Advertisement
in: Scooby-Doo Series, Shows, 1980s shows,
and 16 more

The 13 Ghosts of Scooby-Doo

The 13 Ghosts of Scooby-Doo

24 minutes
Status
Ended
The 13 Ghosts of Scooby-Doo is the seventh incarnation of the Hanna-Barbera Saturday morning cartoon Scooby-Doo, and the final first-run version of the original 1969–86 broadcast run of the series. The series premiered on September 7, 1985 and ran for one season on ABC as a half-hour program. Thirteen episodes of the show were made in 1985. It replaced Scary Scooby Funnies, a repackaging of earlier shows; another repackaged series, Scooby's Mystery Funhouse, followed.

In the initial episode, the gang are thrown off course on a trip to Honolulu in Daphne's plane, landing instead in the Himalayas. While inside a temple, Scooby and Shaggy are tricked by two bumbling ghosts named Bogel and Weerd into opening the Chest of Demons, a magical artifact which houses the thirteen most terrifying and powerful ghosts and demons ever to walk the face of the Earth.

As the ghosts can only be returned to the chest by those who originally set them free, Scooby and Shaggy, accompanied by Daphne, Scrappy-Doo, and a young juvenile Mexican con artist named Flim-Flam, embark on a worldwide quest to recapture them before they wreak irreversible havoc upon the world. Assisting them is Flim-Flam's friend, a warlock named Vincent Van Ghoul (based upon and voiced by Vincent Price), who contacts the gang using his crystal ball and often employs magic and witchcraft to assist them. The thirteen escaped ghosts, meanwhile, each attempt to do away with the gang lest they be returned to the chest, often employing Bogel and Weerd as lackeys.

The 13 Ghosts of Scooby-Doo differed greatly from most previous incarnations of the series, in that it pitted the Scooby-Doo characters against actual supernatural forces. The concept of capturing real ghosts was one that was already familiar in mid-1980s culture after the debut of the film Ghostbusters in 1984; indeed, two other ghost-busting series, The Real Ghostbusters (an adaptation of the film) and a Filmation production known as Ghostbusters, were also soon to debut. Story editor and associate producer Tom Ruegger led the overhaul of the property, and the irreverent, fourth wall breaking humor found in each episode would resurface in his later works, among them A Pup Named Scooby-Doo, Tiny Toon Adventures, and Animaniacs. As with most of the other early-1980s Scooby-Doo series, original characters Fred Jones and Velma Dinkley do not appear.

The series was canceled and replaced by reruns of Laff-a-Lympics in March 1986, before the end of the season. It became the final Scooby series to feature Scrappy-Doo, as it was decided by Ruegger and ABC that they would overhaul the series entirely, developing A Pup Named Scooby-Doo in 1988. At the time of the cancellation, eleven of the thirteen ghost were recaptured, although it is unknown if some of the ghosts captured in the two episodes, "Ship of Ghouls" and "A Spooky Little Ghoul Like You", where more than one of the thirteen ghost were captured, are part of the originals.

1. To All the Ghouls I've Loved Before

3. Me and My Shadow Demon

4. Reflections in a Ghoulish Eye

8. When You Witch Upon a Star

9. It's a Wonderful Scoob

12. The Ghouliest Show on Earth 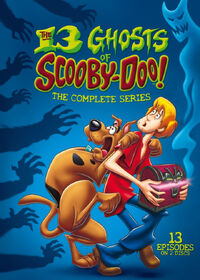 On June 29, 2010, Warner Home Video released The 13 Ghosts of Scooby-Doo: The Complete Series on DVD.