The Cartoon Network Wiki
Register
Don't have an account?
Sign In
Advertisement
in: Animators, Directors, Producers,
and 2 more 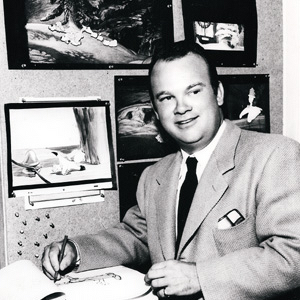 Frederick Bean "Tex" Avery (February 26, 1908 – August 26, 1980) was an American animator, cartoonist, voice actor and director, famous for producing animated cartoons during The Golden Age of Hollywood animation. He did his most significant work for the Warner Bros. and Metro-Goldwyn-Mayer studios, creating the characters of Bugs Bunny, Daffy Duck, Droopy, Screwy Squirrel, George and Junior, and Chilly Willy into the personas for which they are remembered.

Avery's style of directing encouraged animators to stretch the boundaries of the medium to do things in a cartoon that could not be done in the world of live-action film. An often-quoted line about Avery's cartoons was, "In a cartoon you can do anything."[2] He also performed a great deal of voice work in his cartoons, usually throwaway bits (e.g. the Santa Claus seen briefly in "Who Killed Who?"), but Tex also voiced Junior from George and Junior and occasionally filled in for Bill Thompson as Droopy.

In 1996 Cartoon Network produced an animated showcase series that featured MGM and WB cartoons created by Avery, titled The Tex Avery Show. The series aired on the network until June 2004, when it was moved to Cartoon Network's sister network Boomerang.