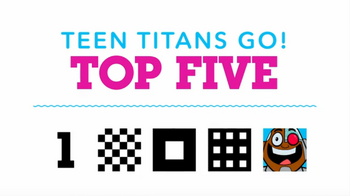 The Teen Titans Go! Top Five is a former Cartoon Network programming block that premiered in September 2015 and aired on Saturday and Sunday mornings at 8:30 AM. The block counted down the top 5 episodes from the past week, as voted by the fans. This block is a throwback to the The Cartoon Cartoon Top 5 block which aired on Cartoon Network from 2002 to 2008. Later in 2016, the block was cancelled.

Retrieved from "https://cartoonnetwork.fandom.com/wiki/Teen_Titans_Go!_Top_5?oldid=85011"
Community content is available under CC-BY-SA unless otherwise noted.