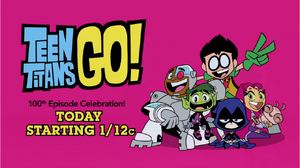 The Teen Titans Go!: 100th Episode Celebration was a 5-day Teen Titans Go! marathon that aired from June 29-July 3, 2015 at 1/12c to 6:30/5:30c. The marathon featured every episode of the series, including the premiere of 5 brand new episodes in five-and-a-half hours, including the premiere of the 100th episode on Friday at 6/5c. The marathon was followed by LEGO Ninjago: Season 5 Premiere Week.

Retrieved from "https://cartoonnetwork.fandom.com/wiki/Teen_Titans_Go!:_100th_Episode_Celebration!?oldid=103920"
Community content is available under CC-BY-SA unless otherwise noted.