September 7, 1968
Space Ghost and Dino Boy is an animated science fiction television series created by Alex Toth and produced by Hanna-Barbera Productions. The series first aired on CBS from September 10, 1966, to September 7, 1968.

The series was composed of two unrelated segments: Space Ghost, depicting the adventures of a heroic hero in outer space, and Dino Boy in the Lost Valley, centering around a young boy stranded in an unknown prehistoric valley.

Each episode contained one segment of Dino Boy sandwiched between two segments of Space Ghost, except for the final two episodes which featured three Space Ghost segments.

Space Ghost, along with teenaged sidekicks Jan and Jace and their monkey Blip, fight villains in outer space. Usually Space Ghost's sidekicks would get captured or trapped by the villains and Space Ghost would have to defeat the villains and save the day. His villains included Zorak, Brak and his brother Sisto, Creature King, Black Widow (aka Spider Woman), Lokar, Moltar, and Metallus.

Space Ghost has the powers of invisibility, flight, a force field, an x-ray like vision penetration beam that comes from his mask, and the ability to project any kind of energy from his wristbands. He has occasionally displayed super strength, which may be connected to his bands.

Dino Boy in the Lost Valley

Dino Boy is a young boy named Todd who parachuted out of a crashing plane with his parents still on board. He lands in an unknown South American valley where dinosaurs, cavemen, and prehistoric mammals somehow have survived alongside some strange creatures and various tribes like the Moss Men, the Rock Pygmies, and others. Dino Boy then meets the caveman Ugh (who saves Dino Boy from a saber-tooth tiger when he first arrives) and his pet Brontosaurus Bronty who become his friends in the episodes to come.

The Dino Boy segments were similar in many ways to the 1960 film Dinosaurus!, which also features a young boy befriending a caveman and a Brontosaurus.

Dino Boy in the Lost Valley

With the exception of the final two episodes (the "Council of Doom" episodes), each episode featured two Space Ghost segments with one Dino Boy segment in-between them. 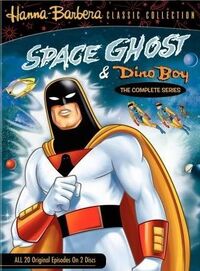 Warner Home Video released Space Ghost and Dino Boy: The Complete Series on DVD on July 17, 2007. The DVD edition presents the episodes on two double-sided DVDs, but alters the order of the episodes from the original air-date order.