January 20, 1968 (1968-01-20)
Shazzan is an American animated television series, created by Alex Toth and produced by Hanna-Barbera Productions in 1967 for CBS. The series follows the adventures of two teenage siblings, Chuck and Nancy, traveling around a mystical Arabian world, mounted on Kaboobie the flying camel. During their journey they face several dangers, but they are always helped by Shazzan, a genie with magical powers out of this world. Each episode contained two separate Shazzan segments.

Chuck (voiced by Jerry Dexter) and Nancy (voiced by Janet Waldo) come across a cave off the coast of Maine where they find a mysterious chest containing halves of a strange ring. When they first joined the rings, they end up transported back to the fabled land of the Arabian Nights where they meet their genie Shazzan (voiced by Barney Phillips). Shazzan creates a magical flying camel named Kaboobie (voiced by Don Messick) to serve as their transportation. Shazzan comments to Chuck and Nancy that he can't return them home until they deliver the two rings to his rightful owner.

Shazzan is very large, being able to hold Chuck, Nancy and Kaboobie in the open palm of his hand. He is wise and jolly in nature, usually appearing with a cheerful "Ho-ho ho-HO!" and referring to the two children as his "little masters". Chuck and Nancy each wear one half of the broken ring, which has to be joined to bring forth their magical servant. A frequent plot device is that the two teenagers became separated, most often by the act of a villain. They can not summon the omnipotent genie until they manage to find each other.

The series is similar in its style and production details to the other Alex Toth-created CBS Saturday morning cartoons of 1966-1968, relying heavily on music and sound effects earlier created for Jonny Quest. As is typical for both animated and live-action TV series of the era that revolve around an ongoing dilemma (Dino Boy in the Lost Valley, Lost In Space, Gilligan's Island, Lidsville, etc.), the heroes never resolve their long-term situation. Chuck and Nancy never find the ring's owner and thus never return to their American teenage lives.

Shazzan is referred to in a commercial as Shazzan, greatest of all genies. As such, he naturally shows off with all kinds of magical powers and appears able to do just about anything, from growing in size, to transforming or empowering others, or changing his own form to escaping situations commonly referred to as inescapable, to altering reality itself. This all may have made it seem like he can do anything and survive anything. However, that is not exactly the case.

First of all, Shazzan is a genie, and has to be summoned with magical items. According to the common myth about genies, destroying such a magical item destroys the genie itself. Which means, if anyone destroyed the rings, Shazzan would also die. In spite of this, his many enemies never try to destroy the rings; rather, they launch their attacks directly on this god-like, gigantic, immortal genie. Shazzan easily defeats them each time by transforming himself, them, or something else in the area into something else, though in some cases, the enemy seals their own fate somehow.

There are also some things that make Shazzan disappear from sight, even if it is only briefly. For example, in the episode "1001 Tricks", Shazzan grows the Jester to his size, and the Jester casts a spell that sends a meteor to crash down on Shazzan. He disappears from sight, and Chuck, Nancy, and Kaboobie are concerned. It is indicated that these things destroy Shazzan, but only briefly, as there are not many surefire ways to destroy a genie permanently.

In addition to all the magic Shazzan can drum up, Chuck and Nancy have magical items which include "Illusion Dust" (which naturally causes a momentary illusion), a magic rope (which will obey the command of the owner), and a cloak of invisibility (which turns the wearer invisible).

3. "The Underground World" / "Demon in the Bottle"

5. "the Evil Jester of Masira" / "The Master Wizard of Mizwa"

7. "The Young Rajah of Kamura" / "The Sky Pirates of Basheea"

12. "The Three Horsemen of Mandragora" / "A Thousand and One Tricks"

15. "The Maze of Mercuraan" / "The Magical Kingdom of Centuria"

17. "Rashid, the Apprentice Sorcerer" / "Kahn of the North Wind" 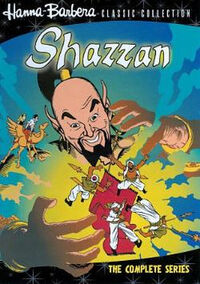 On April 3, 2012, Warner Archive released Shazzan: The Complete Series on DVD in region 1 as part of their Hanna–Barbera Classics Collection. This is a Manufacture-on-Demand (MOD) release, available exclusively through Warner's online store and Amazon.com. All episodes, while not perfect, have been faithfully remastered for this release.