The Cartoon Network Wiki
Register
Don't have an account?
Sign In
Advertisement
in: Hanna-Barbera Series, 1970s shows, Shows,
and 3 more

December 2, 1972
Sealab 2020 is an American animated television series produced by Hanna-Barbera Productions. The show premiered on NBC on September 9, 1972. The series aired its 13th and final episode on December 2, 1972, with three episodes unaired. The series appeared in reruns on USA Network as part of its "USA Cartoon Express" programming block in the 1980s and on Cartoon Network from 1992-2000. As with most Hanna-Barbera series, the show is in occasional rotation on Boomerang, the TV channel that owns the Hanna-Barbera archives.

The series takes place at Sealab, an underwater research base based on the Challenger Seamount (an underwater mountain). Commanded by Captain Murphy, Sealab was home to 250 people, and was dedicated to the exploration of the seas and the protection of marine life.

Among other things, the crew of Sealab faced such challenges as attacks from sharks and giant squids, potential environmental disasters, and threats to Sealab and marine life from shipping. 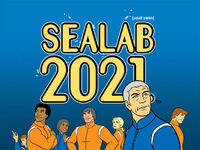 Sealab 2020 was parodied by the Adult Swim series Sealab 2021 from 2001 to 2005. The parody featured the same characters and some of the same animation from the original series. However, Sealab 2021 had a comedic tone and featured different voice actors. 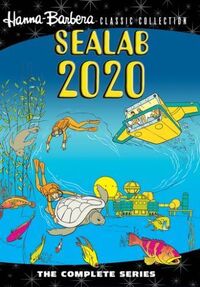 On May 22, 2012, Warner Archive released Sealab 2020: The Complete Series on DVD as part of their Hanna–Barbera Classics Collection. This is a manufacture-on-demand (MOD) release, available exclusively through Warner's online store and Amazon.com.