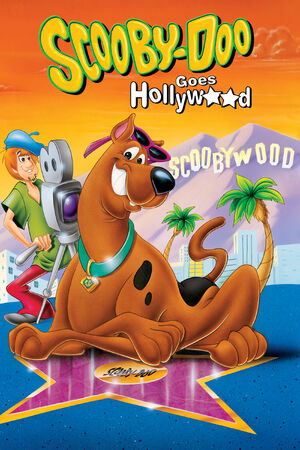 A musical-based parody of both the Scooby-Doo formula and of Hollywood in general, the storyline centered on Shaggy convincing Scooby that both of them deserve better than being stars in what he considers a low-class Saturday morning show, and attempts to pitch a number of potential prime-time shows to network executive "C.J." (voiced by Rip Taylor), all of which are parodies of movies and then-popular TV shows which are How The West Was Won, Happy Days, Laverne & Shirley, Superman, Saturday Night Fever, Sonny & Cher, The Love Boat, and Charlie's Angels. Caught in the middle of this entire ordeal are Fred, Daphne, Velma, and also Scooby's loyal Saturday morning fan base; all of whom convince Scooby to come back to his Saturday morning TV show.

Scooby and Shaggy are filming a mystery episode of their cartoon while Daphne and Velma are discussing the script outside. After Scooby and Shaggy fall on the ground after going through a catapult, they start getting tired of doing the same routine, and decide to become real movie stars ("The Name to Remember is Scooby-Doo"). They show the president of film, C.J., a pilot film called How Scooby Won the West, where Sheriff Scooby and Deputy Shaggy undergo the ornery Jesse Rotten. C.J. believes the film is a joke, and throws Shaggy and Scooby out, laughing. After the gang finds out Scooby is leaving the show, they protest while Shaggy tells how Scooby will become famous.

At the roller-skating rink, Shaggy is filming another pilot (Lavonne and Scooby) while Lavonne skates with Scooby, turning out to be a disaster with several accidents. The gang watches the filming, believing Scooby is making a fool of himself. Shaggy goes to C.J. as another attempt for Scooby to star in real movies. They show another film called Scooby Days where "the Scoob" meets "the Groove" in Harold's Drive-In. C.J. is stressed after the film, and suggests that Scooby go back to his own show. Scooby refuses, later trying to mingle with celebrities, turning out disastrous in the newspapers.

Back in the gang's dressing room, Fred reads the newspaper in shock, making all of them wish Scooby came back on the show. Meanwhile, Shaggy drives Scooby to the Chinese theater saying Scooby would be another Clark Gable and John Travolta. Scooby then asks, "Rassie?" (referring to Lassie) and Shaggy agrees with that, too. Looking at the Chinese theater, Scooby imagines a premiere of his two new movies (Super Scooby and The Sound of Scooby). In Super Scooby, he saves a Lois Lane clone from a rocket heading toward Big City, only to get blown up himself. In The Sound of Scooby, Scooby in a pink dress, twirls in the mountain, but as he begins to sing, he falls down a cliff into a stream.

Back at the Chinese theater, Shaggy finds out that the studio is holding dog auditions to replace Scooby's role on the show. He and Scooby go down to see the results of the auditions. Without them knowing, it is a trick to get Scooby back on the show once again. C.J. hires a dog with no talent to take Scooby's role, leaving Scooby and Shaggy in shock. To confirm his new career, Scooby is featured on The Jackie Carson show, saying he's leaving his cartoon series, upsetting his fans. Later, Shaggy shows C.J. a new film, Scooby and Cherie where Scooby is a magician and Cherie, his assistant. The next film is The Love Ship where Captain Scooby forgets to untie the rope from the piers, taking all the people on it with the cruise.

The next (and last) pilot film shown is Scooby's Angels where the Angels (possibly the original Sabrina, Kelly, and Jill) look into criminal headquarters and Scooby lands from an aeroplane without a parachute. Scooby then yells, "Rop the rameras! Rop the rameras!" in which C.J. agrees. C.J. then shows everyone outside, chanting "Scooby-Doo, we need you!". Scooby decides everyone loves him for who he is and agrees to go back to his original show "for the kids". After things have quieted down in C.J.'s office, Shaggy knocks on the door, showing him the tape of his own pilots. The movie ends with Shaggy (tied up in the film reel) following the Mystery Machine into the sunset.

The special was first released on VHS by WorldVision Enterprises in the 1980s, and is currently available on DVD from Warner Home Video.

Retrieved from "https://cartoonnetwork.fandom.com/wiki/Scooby-Doo_Goes_Hollywood?oldid=75906"
Community content is available under CC-BY-SA unless otherwise noted.