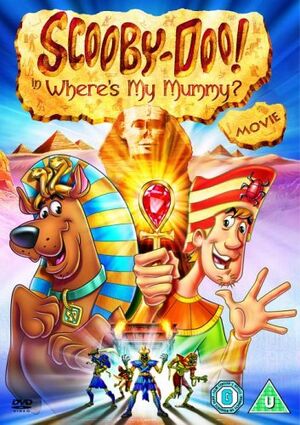 Scooby-Doo! in Where's My Mummy? is the ninth in a series of direct-to-video animated films based upon the Scooby-Doo Saturday morning cartoons. The gang is in Egypt, where a curse by the last Egyptian pharaoh, Cleopatra, may be the source of trouble for Egypt.

The gang goes to Egypt to surprise Velma, who has been restoring the famous Sphinx for the past six months with Prince Omar. However, the Mystery Machine runs out of water in the radiator. Scooby and Shaggy try to find water for the Mystery Machine, and find a lake with a water which turns out to be a mirage. The gang meets an Egyptian nomad Amahl Ali Akbar and his hawk Horus. With their help, the gang is able to get to the Sphinx and meets "Fear Facers" host Rock Rivers whose show was recently canceled because he faked some footage. He then tells them of the curse. Scooby feels a familiar smell and leads the gang to Velma. Velma is surprised and introduces Omar to her friends. Velma then shows an ancient necklace which she found with the tomb of Queen Cleopatra. Suddenly, a nasty grave robbing scientist and treasure hunter named Dr. Amelia von Butch and her minions appear to loot the tomb.

Against the wishes of Velma and Omar, Dr. von Butch and her team use modern equipment and explosives to open the tomb, unleashing a curse made by Cleopatra. The curse says that all who enter will be turned to stone. No one believes this until Omar is accidentally separated from the others. As Scooby and Shaggy return to check on him, they find him as a statue. Dr. von Butch decides to enter the tomb anyway. The gang decides to solve the mystery. Velma protests saying this is too dangerous, but agrees to let them solve the mystery. Scooby and Shaggy want to guard Omar, but the gang tells them that it's a mystery with no split up. The gang then follows Dr. von Butch. After accidentally setting off a trap, the gang is split up.

The gang, Dr. von Butch and her minions are then attacked by the army of mummies, but are all able to escape. Dr. von Butch and her minions then separate. While investigating the entire tomb in looking for Scooby and Shaggy, Velma slips on the ground and drops her glasses. Someone gives her back her glasses who turns out to be a mummy and Velma ends up being attacked. Fred and Daphne hear her screams and run to save her, but are too late: Velma has been turned into a statue too. Fred takes Omar's journal and Daphne takes the necklace.

Fred and Daphne try to stop Dr. von Butch while Scooby and Shaggy discover a Lost City where they are mistaken for the returning pharaoh Ascoobis and his faithful manservant. Scooby then loses his collar. Fred and Daphne continue searching for Scooby and Shaggy until they bump into Rock Rivers and begin suspect him. They meet up with Dr. von Butch and are all attacked by Cleopatra. Fred, Daphne, Dr. von Butch and her minions are able to escape, but Rock Rivers is left behind only to be turned into a statue. Fred and Daphne leave the tomb and escape into a town which is close.

In a nearby town, at a bazaar, Fred and Daphne are attacked by a disguised Dr. von Butch and her henchmen Campbell and Natasha where Fred and Daphne were hit by a sleeping powder as Dr. von Butch steals an artifact from them. Later that night, Amahl uses an herb to wake up Fred and Daphne and tells them that Horus is looking for Shaggy and Scooby. Horus finds Scooby's collar and leads them to where he found it.

Meanwhile, the Lost City's leader Hotep, attempts to feed them to his Spirit of the Sand, a giant scorpion monster that turns out to be a robot he had built. Fred and Daphne arrive with Amahl, who reveals Hotep to be the brilliant civil engineer named Armin Granger who is illegally damming the Nile River.

After this, Fred and Daphne tell Scooby and Shaggy about Velma. Daphne gives back Scooby's collar until she realizes that the necklace is missing. The gang finds out that Dr. von Butch stolen the necklace. The gang comes up with a plan. Meanwhile, Dr. von Butch and her minions return to the tomb, but are kidnapped by Cleopatra and the mummies.

The gang leads an army composed of the citizens of the Lost City into Cleopatra's tomb to break the curse and free Velma. Dr. von Butch is able to escape. In the chaos of the battle between an army led by Daphne (pretending to be Cleopatra) and Cleopatra's undead army, The evil Amelia von Butch - who has now lost all of her team to the curse - sneaks into the chamber of Cleopatra, stealing the crown of Cleopatra and causing the Nile River to burst through the tomb, un-damming the Nile and flushing out the riches hidden in the tomb, thus restoring the treasure to the people of Egypt according to Cleopatra's last wish. Amahl captures Dr. von Butch.

The mystery is solved when it is revealed that Cleopatra's mummy was really Velma, who had planned the whole thing along with Prince Omar and his workers in order to scare away treasure hunters. They had made cement copies of themselves to pass off as victims of "the curse". Dr. von Butch and her team (who were never turned to stone, just copies like Velma and Omar), are taken to jail. The gang is confused why Velma kept that on a secret. Velma explains that she was afraid that her friends would get hurt during the mission.

Some time later, the restoration of the Sphinx is finally ceompleted. When Shaggy fires a jumbo-sized firecracker (which he comments "fit for the Pharoahs"), it hits the Sphinx's nose which once again falls off. Omar states that the Sphinx "looks better this way", and the gang shares a laugh.

Warner Home Video released Scooby-Doo! in Where's My Mummy? on DVD in Region 1 on December 13, 2005.

Retrieved from "https://cartoonnetwork.fandom.com/wiki/Scooby-Doo!_in_Where%27s_My_Mummy%3F?oldid=76426"
Community content is available under CC-BY-SA unless otherwise noted.