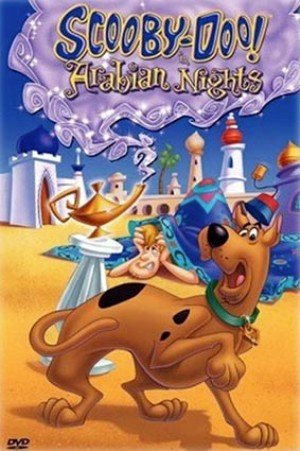 Scooby-Doo! in Arabian Nights is a 1994 television special produced by Hanna-Barbera that premiered on TBS on September 3, 1994. It is an adaptation of The Book of One Thousand and One Nights.

The program is marketed as part of the Scooby-Doo franchise and features appearances by Scooby-Doo and his owner, Shaggy Rogers, in wraparound segments (in a rarity for the franchise, no other supporting characters appear; either Scrappy-Doo and/or the other members of Mystery Inc. appeared in virtually every other production to date).

The bulk of the special is devoted to two tales, one starring Yogi Bear and Boo-Boo and the other featuring Magilla Gorilla. It is animated with bright colors, stylized character designs and a more flat style compared to the previous television movies, and musically scored by veteran animation composer Steven Bernstein, showing strong influence from the high-budget Warner Bros. Animation/Steven Spielberg productions of the era, Tiny Toon Adventures and Animaniacs.

It was also the last time that Don Messick voiced Scooby and Boo Boo as well as the last full-length television program to feature Casey Kasem as Shaggy before he quit the role in a dispute over the character's diet (Kasem would return to the role in 2002). It is the final cartoon to date to feature Magilla Gorilla as well as the last Scooby-Doo product to be produced before Hanna-Barbera itself was absorbed into Warner Bros. Animation.

Scooby and Shaggy are hired as royal food-tasters by a young Caliph - a job offer they can't refuse. When they eat everything, the Caliph gets mad and has his guards chase them, until he finds Shaggy disguised as a harem girl. Hoping to make the prince fall asleep, Shaggy tells him two classic stories

The first tale is about a female character named Aliyah-Din and how the genies (played by Yogi and Boo Boo) help her obtain the love of a prince while thwarting the plot of the evil vizier Haman.

The second and final tale is about Sinbad the Sailor (played by Magilla Gorilla) and how he mistakens a pirate ship for a cruise ship, the latter being a running gag throughout the story.

Before Shaggy can escape, the Caliph decides to start the ceremony right away. When the wedding cake arrives, Shaggy pigs out and his ruse is discovered. He and Scooby are asked to be the royal storytellers, and the duo accept along with being the royal food tasters again.

Scoob-Doo! in Arabian Nights is currently available on DVD from Warner Home Video.

Retrieved from "https://cartoonnetwork.fandom.com/wiki/Scooby-Doo!_in_Arabian_Nights?oldid=104231"
Community content is available under CC-BY-SA unless otherwise noted.