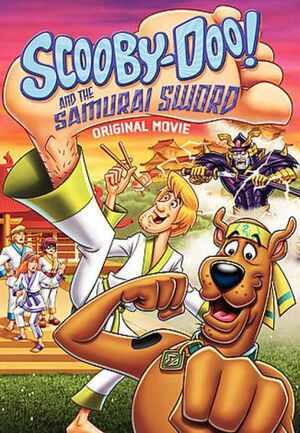 Scooby-Doo! and the Samurai Sword is the thirteenth of a series of direct-to-video animated films based upon the Scooby-Doo Saturday morning cartoons. The movie was released on April 7, 2009, and was produced by Warner Bros. Animation, though it featured a logo for and copyright to Hanna-Barbera at the end (this was the last time the logo was shown until 2017's The Jetsons & WWE Robo WrestleMania!).

The movie features the Mystery, Inc. gang traveling to Japan and is the final Scooby-Doo film to feature Casey Kasem as the voice of Shaggy Rogers, as he retired a few months after the film was released. It is one of the few Scooby-Doo adventures to feature a villain of purely supernatural origin.

At a Tokyo museum of ancient history, Mr. Takagawa, the curator, and Kenji, a janitor, witness the resurrection of The Black Samurai, an ancient Japanese warrior whose armor was to be the newest exhibit at the museum. The next day, the Mystery Inc. gang arrives at Tokyo, where Daphne is to participate in a martial arts tournament at a prestigious school. The gang meet Daphne’s friend Miyumi, who explains the difficulty of winning the tournament and entering the school as a student. The gang and Miyumi take a fully functioning robotic plane to the school, which is run by Miss Mirimoto. After Daphne defeats Miss Mirimoto’s bodyguard, Sojo, and almost defeats Miyumi, Mirimoto tells her she shows promise as a fighter. Also at the tournament is Mr. Takagawa, who explains to Mirimoto that the Black Samurai has risen and will be after the Destiny Scroll, which is at the school. That night, during a feast, the Black Samurai and his Ninja warriors attack the school and steal the scroll. But Mirimoto explains the scroll was only a copy, and shows the gang the real one. Mr. Takagawa explains to the gang the legend of the Black Samurai.

The Black Samurai was an ancient warrior who asked the great swordsmith Masamune to craft a powerful sword. The sword maker agreed, but told the Samurai it would take a year to make. Masamune’s evil apprentice Muramasa offered to make another sword for the Samurai in only half the time, which the Samurai accepted. But when the Samurai took the sword, the evil of Muramasa was transferred to him, and he became the Black Samurai, wielding the Sword of Doom. When Masamune finished crafting his sword, the Sword of Fate, he presented it to The Green Dragon, who used it to defeat the Black Samurai and imprisoned him in the Sword of Doom. The Dragon then hid the sword, and put its whereabouts in a riddle on the Destiny Scroll.

Velma is able to solve the riddle, and Miss Mirimoto instructs the gang, Miyumi, and Mr. Takagawa to find the Sword of Doom before the spirit can. The gang finds the sword in a cave on an island in the Pacific Ocean, where they are attacked by the Black Samurai. During the fight the Black Samurai is revealed to be Sojo. But once the gang brings Sojo back to Miss Mirimoto, she and Miyumi capture them. Miss Mirimoto explains that she staged the tournament to bring the Mystery Inc to Japan so that they would find the Sword of Doom for her. She also reveals she plans to release the Black Samurai so she can use him to return Japan to the way it was in feudal times. The ninja army is revealed to be robots in which Miss Mirimoto planted the various fighting techniques of her students (including Daphne's). She then locks Fred, Daphne, Velma, and Mr. Takagawa in the museum, but not before Daphne kicks the Samurai's sword from Miss Mirimoto's hand into Scooby and Shaggy's possession.

Scooby and Shaggy manage to escape Miss Mirimoto with the samurai sword, but are chased by the ninja warriors. They are saved by Matsuhiro, a sushi shop owner and Samurai, who trains them as Samurai and who also is aware of the legend. Matsuhiro instructs Scooby and Shaggy to pass through the gates of earth, air, fire, and water in order to find the Green Dragon and the Sword of Fate. When they do so, the Green Dragon enters the sword and takes them back to the museum to combat the Black Samurai. Kenji frees Fred, Daphne, Velma, and Mr. Takagawa, and they, plus Miyumi, who decides to fight with them, attempt to stop Sojo and Miss Mirimoto from resurrecting the Black Samurai, but failed. After reviving the Samurai, Miss Mirimoto tries to make him her servant, but the villain throws her against the palace stairs, knocking her out. Scooby and Shaggy arrive riding the Green Dragon and, along with a little encouragement from Matsuhiro, defeat the Black Samurai by using the Sword of Fate to destroy the Sword of Doom, breaking the curse on the Samurai, who finally passes on to the afterlife. Later, the gang attends the newly renovated museum, where a statue of Scooby is erected in his honor.

Warner Home Video released Scooby-Doo! and the Samurai Sword on DVD in Region 1 on April 7, 2009.

Retrieved from "https://cartoonnetwork.fandom.com/wiki/Scooby-Doo!_and_the_Samurai_Sword?oldid=86855"
Community content is available under CC-BY-SA unless otherwise noted.