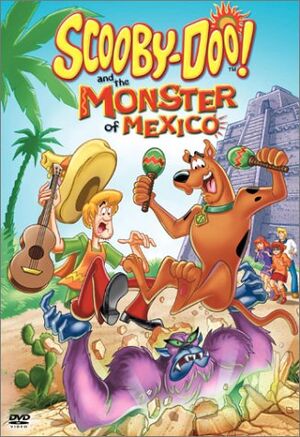 Scooby-Doo! and the Monster of Mexico is the sixth of a series of direct to-video animated films based upon the Scooby-Doo Saturday morning cartoons. It was released on September 30, 2003 and it was Produced by Warner Bros. Animation (though done in a retro format resembling the classic 1970s Hanna-Barbera cartoons).

This film marked the second and final time since The New Scooby-Doo Movies that Frank Welker, Casey Kasem, Nicole Jaffe, and Heather North were all featured on a Scooby-Doo project. Frank Welker voices both Fred Jones and Scooby-Doo, because of Don Messick's death in 1997.

Fred's pen-pal Alejo Otero, who lives in Veracruz, Mexico, invites Fred and the rest of the gang to visit him and his family there. Fred and the rest of the gang talk about it until they decide to go. However, after Alejo sent the invitation to Fred, a monster started to terrorize the population of Veracruz. Both Alejo and his son see the monster, and the locals start calling it la chupacabra.

Later, when Mystery, Inc. arrives in Veracruz, they meet Alejo who recognizes them all from Fred's letters. Alejo runs a huge and fancy hotel, and he shows them around and where they will be staying. He then shows them his family which include his wife Sofia, his mother Doña Dolores, his brother Luis, and Luis's fiancée, Charlene. Luis tells the gang he met Charlene when he visited America, at a theme park run by Mr. Smiley. The gang and the family enjoy a meal, and Dolores talks about her late husband. Then, a man named Señor Fuente arrives and asks to speak with Alejo and Luis. Dolores tells the gang that Fuente has been trying to get her to sell the hotel to him ever since her husband died. Meanwhile, Alejo and Luis tell Fuente once again that they do not want to sell the hotel. Fuente leaves, and the family go inside because of a fierce storm. When inside, Alejo is forced to tell the gang about the monster. He says that he does not have many other guests besides the gang because El Chupacabra has been scaring them away. Luis and Charlene tell the gang to lock their doors when they go to sleep.

During the night, Shaggy and Scooby-Doo are scared when they think they hear a noise. They then hear a loud growl and run screaming out of their cottage. They wake up Fred, Velma, and Daphne. After seeing footprints outside of Shaggy and Scooby's window, Fred declares that there is a mystery they have to solve. The next day, the gang, Alejo, and Luis set out to search for the monster. Charlene gives Luis a charm for good luck. Daphne interviews the townspeople, but none of them are able to find El Chupacabra. When they get back to the van, they find someone has written on it, threatening them to either go away or not see tomorrow. The gang realizes this is serious and decide to search at night. Fred, Velma, and Daphne go one way, Alejo and Luis go another way, and Shaggy and Scooby stay at the van.

At night, Shaggy and Scooby sleep in the van, while someone takes away their brake fluid. Fred, Velma, and Daphne search the woods, and find El Curandero, a medicine man. El Curandero tells them they need to look at history and that they are in grave danger. Meanwhile, Alejo and Luis are searching when Alejo sees El Chupacabra. Alejo is chased and nearly falls off a cliff, but he manages to hold on. He calls for Luis, but there is no answer. The monster disappears, and Luis shows up, saying he was hit on the head by the monster. Luis helps his brother up from the cliff.

Shaggy and Scooby start driving, but when they realize they cannot stop, they get scared. They meet up with Fred, Velma, Daphne, Alejo, and Luis who were being chased by El Chupacabra. Eventually, the van runs out of gas and stops right in front of a gas station. The van gets fixed, and Alejo gets some ice for Luis's head wound, but Luis does not have a bump on his head. Luis says he is fine. The gang drives along and finds a sign to a history museum, and thinking that is what the medicine man said, go to it. When they get there they meet a suspicious and hyper museum guide who leads them into an auditorium. There they see a performance about Mexican customs. The guide then makes Daphne volunteer, and she kidnaps her, vanishing with a puff of smoke. The rest of the gang find a secret passageway and follow it, until they come to Aztec pyramids. They find Daphne at the top of one and rescue her, but the tourists chase after them, thinking they have stolen something. After a long chase scene, they finally return home.

The next day is the Day of the Dead, and all go to the cemetery, where Dolores informs them that Charlene has been captured by El Chupacabra. The family gives offerings to the grave of Señor Otero and hope Charlene can be found. Suddenly, the ghost of Señor Otero comes out of his grave and tells them to sell the hotel and the land or they will be in danger. At same time, Fred just revealed the good luck charm Luis has is really a tracking device instead of ancient medallion. The family cannot believe that Señor Otero would want them to sell, but Scooby realizes something is suspicious. He follows a beeping noise that is actives by pushing the button from the tracking device until he finds a man in a skeleton suit controlling the ghost. The gang catches him, and he is revealed to be Mr. Smiley. Then, El Chupacabra appears and scares everyone.

After chasing the gang, the monster is caught up in some wiring. The gang pulls off the mask, and it is revealed the museum guide they saw earlier is the monster. She tells them she loves Mr. Smiley and that they were going to get all the land. Luis asks what happened to Charlene, and the guide tells him he will never see her again and he should forget about her. Velma then guesses something is up and realizes the face the guide has is a mask, and pulls it off to reveal that Charlene was the guide and El Chupacabra. Fred says that the message written on the van ("Sal ahora o no veras el dia de manana!" - Leave today or you won't see tomorrow!) was not in proper Spanish, so it had to be someone who did not speak Spanish. Señor Fuente says that he did want the land, but he respects that the family does not want to sell. However, Mr. Smiley refused to accept this and decided to ruin the business by scaring away all their customers with his wife dressed as El Chupacabra. Fuente also says when he learned of Mr. Smiley and Charlene's scheme, he wanted to warn the Oteros and gang of what's going on. Charlene and Mr. Smiley are taken to jail, and Luis admits that he did not go to Alejo's rescue because he was paralysed with fear. Alejo comforts him, telling him there are worse things than being a coward, (as Shaggy says he's made a career out of being a coward) and everyone enjoys the Day of the Dead.

Warner Home Video released Scooby-Doo! and the Monster of Mexico on DVD in Region 1 on September 30, 2003.

Retrieved from "https://cartoonnetwork.fandom.com/wiki/Scooby-Doo!_and_the_Monster_of_Mexico?oldid=87092"
Community content is available under CC-BY-SA unless otherwise noted.