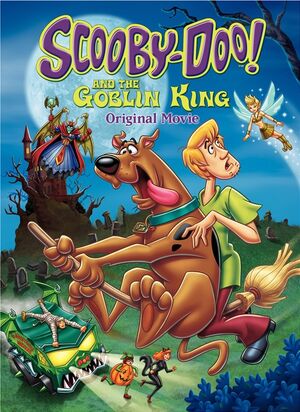 Scooby-Doo! and the Goblin King is the twelfth in the series of direct-to-video films produced by Warner Bros. Animation (though it used a Hanna-Barbera logo at the end of the movie). This movie, along with the next film Scooby-Doo! and the Samurai Sword were both produced and completed in 2008, but Goblin King was released first in time for the Halloween season. It was dedicated to Paulette Oates, who helped resurrect Warner Bros. Animation in the late 1980s. All the main voice actors of Mystery, Inc. reprise their roles. The DVD was released on September 23, 2008. This is the first Scooby title produced entirely without either one of the original creators, William Hanna and Joseph Barbera.

Scooby-Doo and the Goblin King focuses on Shaggy and Scooby as the main characters, something that had not been seen since the television movies of the 80's.

The Mystery, Inc. gang visit a Halloween carnival on Halloween night; however, when the magician "The Amazing Krudsky" (voiced by Wayne Knight) does not allow Scooby to see his show, he and Shaggy accidentally expose Krudsky as a fraud during one of his acts, resulting in the gang getting kicked out of the carnival. Later, the rebellious Fairy Princess Willow (voiced by Hayden Panettiere) enters Krudsky's tent, where he secretly reveals his wishes to become a real magician. The fairy inadvertently causes Krudsky to notice her on the Goblin Scepter in a spell book, which can be combined with fairy magic to control Halloween. Krudsky then gets an idea to obtain the scepter and rule the world with it. Willow decides to toy with him, but while flying, she accidentally slams her small body against a metal chair knocking her out; Krudsky then crushes her with his flyswatter. When he notices her cry of pain from being crushed, he sees that she is a real fairy, kidnaps her, and absorbs her magical powers, thus becoming a real magician.

Meanwhile, Scooby and the gang go trick-or-treating all night. Shaggy's and Scooby's last stop is a spooky looking house which claims to be a "genuine magic shoppe". However, a very loud thunderstorm also begins, frightening the heroes. Inside, they meet the kind Mr. Gibbles (voiced by Wallace Shawn), who reveals that magic really does exist. At that moment, Willow enters being chased by Krudsky; he captures her and turns Gibbles into a rabbit, and steals the magic equipment before leaving. Mr. Gibbles explains to an astonished Shaggy and Scooby that Krudsky, after capturing the good magic of the princess, will now want the bad magic held in the scepter of the Goblin King, which will, as well, cause an imbalance in the supernatural order. Shaggy and Scooby board the Grim Reaper Railway which flies them to the spirit world. Once they arrive, the two realize that they need to get the scepter before Krudsky can, and return home before sunrise or else they will be trapped in the magic world forever. Before they depart, Gibbles gives them magic cards that perform spells just by reading the inscription on each one; however, they have to be saved for emergencies because each card can only be used once and each spell is temporary. To make it less suspicious-looking, Shaggy and Scooby are magically disguised by being transformed into monster-like versions of themselves.

While looking for Shaggy and Scooby, Fred, Daphne, and Velma see Krudsky conversing with the Goblin King through a mirror where the Goblin King (voiced by Tim Curry) agrees to exchange his scepter for Princess Willow at midnight at a clock tower. However, seeing that all the evil magic and the Goblin King are real causes Velma's rational mind to shut down; Fred and Daphne leave Velma to rest and go the tower and set a trap for the Goblin King and Krudsky. Back in the magic world, Shaggy and Scooby go to a bar owned by a werewolf (also voiced by Tim Curry) and find that everyone is afraid of the Goblin King and will not help them. The Goblin King's two bumbling goblin henchmen, Glob and Glum (voiced by James Belushi and Larry Joe Campbell), attempt to capture Scooby and Shaggy, but the latter two are saved by Jack O'Lantern (voiced by Jay Leno), a living pumpkin who leads them to three witches while running away from the Headless Horseman. Along the way, they avoid the chasing monster (who was Jack's former body) by heading across a covered bridge which he cannot cross. The three of them arrive at the Witches' Hut where they meet the Grand Witch (voiced by Lauren Bacall) and her two fellow witches (voiced by Grey DeLisle and Russi Taylor). The witches send Shaggy and Scooby on a ride on their flying broomstick named "Broomy" towards the Goblin King's castle, but they are shot down by Glob and Glum by a goblin gun-like cannon.

Krudsky and new his goblin army set off the take over the world. He turns the Mystery Machine into a living monster vehicle to chase Fred, Daphne, and the now-awakened Velma. They capture the three and Krudsky uses his powers to turn Fred into a vampire, Daphne into a witch, and Velma into a werewolf (respectively). At that moment, Scooby, Shaggy, and Jack O'Lantern arrive having been saved from the dungeon before sunrise by the fairies and Broomy. Jack apparently sacrifices himself to strip Krudsky of the staff of which Scooby uses to break Krudsky's spells, restoring his friends, the Mystery Machine, and the Goblin King back to normal, in which the latter then uses his restored powers to imprison Krudsky.

The Goblin King is revealed to be Willow's father, who holds her responsible for all the trouble caused and grounds her for a year, though he does admits that he is relieved to have her back. Mr. Gibbles brings Jack back to life with the king's help, who then takes Krudsky prisoner for both his crimes and treachery (the Goblin King tells him that he'll have plenty of time to "work on his act"). He, the goblin army, Willow, Jack, Broomy, and Mr. Gibbles all return to the magical world. But before departing and to also keep the balance between the worlds, the Goblin King uses one final spell to erase the memory of the events from Fred's, Daphne's, Velma's, and the others' minds; however, Scooby and Shaggy are allowed to keep theirs as they have proven their courage.

As morning comes, Fred, Daphne, and Velma forget what transpires (due to the effects of the memory-erasing spell) as Shaggy and Scooby-Doo come to pick them up. As the carnival packs up, Scooby uses an unpacked mirror one last time to spook the gang as the film ends.

Warner Home Video released Scooby-Doo! and the Goblin King on DVD in Region 1 on September 23, 2008.

Retrieved from "https://cartoonnetwork.fandom.com/wiki/Scooby-Doo!_and_the_Goblin_King?oldid=77789"
Community content is available under CC-BY-SA unless otherwise noted.