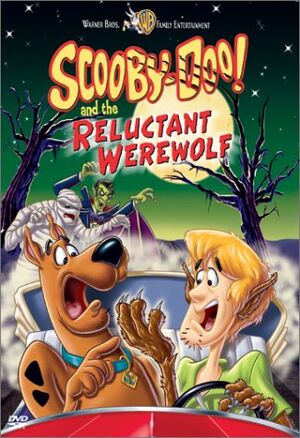 Scooby-Doo! and the Reluctant Werewolf is a 1988 animated comedy horror "made for television" movie produced by Hanna-Barbera. It was the last made for TV movie to air as part of the Superstars 10 series. It also marks Scrappy-Doo's last appearance until 2002's Scooby Doo live-action feature film.

Every year, all of the classic Hollywood monsters (consisting of Frankenstein's monster, his wife Repulsa, a Mummy, the Witch Sisters, Bone Jangles the Skeleton, Dr. Jackal/Mr. Snyde, Swamp Thing, and Dragonfly) gather at Count Dracula's castle in Transylvania for the "Monster Road Rally", an ultimate road race similar to Wacky Races, awarding the winner with the "Monster of the Year" award as well as many other prizes only monsters would enjoy (and one prize — a trip to Hawaii — that none of the monsters want). This year however, Dracula receives a postcard from the Wolfman stating that he has retired to Florida and will not be participating. Lacking one of the most well known monsters, Dracula fears they will have to cancel the race. Luckily, Dracula's minion Wolfgang notifies him there is another option, namely, to create a new werewolf. After searching an old book for information on who is next in line to become the next werewolf, it is revealed that it is none other than Shaggy Rogers.

Dracula sends his hunchbacked henchmen (the mushmouthed, incomprehensible Crunch and the well-articulated British Brunch, together known as "The Hunch Bunch") to America to transform Shaggy into a werewolf and bring him back to his castle. After a few thwarted attempts, the Hunch Bunch manage to transform Shaggy by exposing him to moonlight while he is at a drive in movie with Scooby, Scrappy, and his girlfriend Googie in his customized race car. The Hunch Bunch then picks up the car using their "bat-copter" and flies the group back to Transylvania. Here, Shaggy is informed that he was chosen to be the next werewolf and that he must participate in the monster race. Shaggy, wanting to return to his normal life, is displeased with his current situation. Ultimately, however, Shaggy chooses to make a deal with Dracula, and states that he'll race. On condition that if he wins, Dracula must return him back to his human state, and allow him and his friends to leave.

Dracula agrees but secretly begins planning ways to keep Shaggy from winning. After being kept up most of the night, driving the severely detuned wolf-wagon in the race, being sent on misleading detours, rescuing Scrappy and Googie from traps, and dodging dangerous monsters and magic spells, he even sends Ghengis Kong who grabs Scooby and tickles him, Shaggy manages to win. Dracula refuses to revert the spell, claiming he had his fangs crossed when they made the agreement. The heroes steal Dracula's spell book and make their getaway. Dracula chases them in his weaponized car and then his plane, where the four only barely manage to dodge Dracula's powerful gadgets, but a thunderstorm ensues and Dracula's plane is struck, sending him plummeting into the ocean below where he is chased off by a shark.

In the end, Googie uses the book to change Shaggy back to normal and the group is happy for him to be normal. That night, the gang all sit down to watch another horror movie, but Dracula, Brunch and Crunch sneak up behind their window, and say "We're baaaack!".

Retrieved from "https://cartoonnetwork.fandom.com/wiki/Scooby-Doo!_and_The_Reluctant_Werewolf?oldid=104233"
Community content is available under CC-BY-SA unless otherwise noted.