The Powerhouse era was the third era of Cartoon Network. It began on March 2, 1998, transitioning out of the Checkerboard and Starburst eras, and ended during the early morning hours of June 14, 2004. It was succeeded by the CN City era. The last program to air under the Powerhouse era on June 14, 2004 was Captain Planet. "Screwy, Ain't It" was the slogan for the era until 2001, along with the secondary slogan "You With Us" (to promote Cartoon Cartoon Fridays) in the following year, and until 2003. Powerhouse is widely considered the network's best era alongside the CN City era, due to its sheer variety of high-quality programming, and was one of their longest-lasting eras.

The era was named after the Raymond Scott composition "Powerhouse", which was the musical theme for most bumpers and graphical elements of this period. However, on January 20, 2003, the Powerhouse music was removed from the bumpers and replaced with a series of generic fanfares and library themes (except for the Robot Jones and Kids Next Door bumpers, the turkey "Coming Up Next" bumper and on the later weekends, when the Powerhouse music was used for Coming Up Next bumpers). Also, the yellow, green and dark blue/black backgrounds for the bumpers were removed in 2003 (with the strange exceptions of the "Coming Up Next" bumpers until May 2003), leaving only the blue and purple backgrounds still in use until 2004. 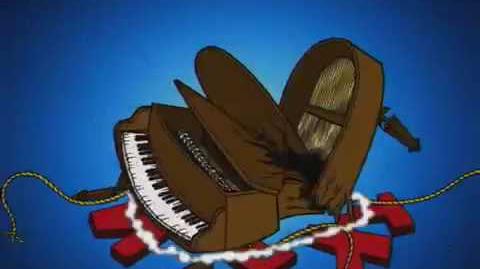 In the "We'll Be Right Back" and "Back to the Show" bumpers for many shows in evening time, primetime in weekdays and weekends, the era's announcers Hartman, Shearer, Welker and Clark were replaced as announcers by CN characters, such as Bugs Bunny (voiced by Jeff Bergman), Dexter (voiced by Christine Cavanaugh), Ed (voiced by Matt Hill), Lu (voiced by Nancy Cartwright), Mike (voiced by Nika Futterman), Courage (voiced by Marty Grabstein), Fred Jones (voiced by Frank Welker) and Johnny Bravo (voiced by Jeff Bennett). Also, in the Powerpuff Girls-related bumpers, the voice of the narrator (voiced by Tom Kenny) was used instead. The bumpers with the characters as the announcers were used until 2003 when the Powerhouse bumpers were overhauled.

After Adult Swim signed off at 5:00am on June 14, 2004, Time Squad and Captain Planet were the final two shows to air under the Powerhouse era. At 6:00am, the City era debuted and The Powerpuff Girls was the first show to air under the City era. Also, when Toonami: Midnight Run aired or after Adult Swim signed off during that time, the dark blue/black "Coming Up Next" bumpers were also used.

With the transition from both the Checkerboard and Starburst eras to the Powerhouse era, the network slowly began to feature their original series more prominently. This eventually led to the classic animation programming block, Boomerang, being split off into its own network in April 2000, taking most of the classic Hanna-Barbera series with it. A total of 14 original series were produced during this era.

During this era several notable programming blocks were introduced including: Cartoon Network's Cartoon Theatre, a movie block that aired on CN from July 1998 to 2007; Cartoon Cartoon Fridays, a weekly programming block through which the network premiered new episodes of its original series; and Adult Swim, a late-night block aimed at a more mature audience that would become it's own channel and take over the entire night schedule in 2005 (despite still sharing channel space with Cartoon Network).

When the Friday-themed program blocks were not airing at any time of the week, The Grim Adventures of Billy and Mandy and Evil Con Carne episodes that first aired on Grim & Evil were the only episodes seen during the Powerhouse era's normal weekly and weekend programming.