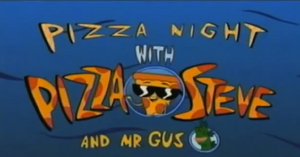 Pizza Night with Pizza Steve (also known as Pizza Night with Pizza Steve and Mr. Gus) is a former 2-hour Friday night Cartoon Network block, hosted by Pizza Steve and Mr. Gus from Uncle Grandpa, that aired from 7:00 pm to 9:00 pm from September 6, 2013 to February 2014. The block also featured the titular character(s) in short skits during the commercial breaks. During late 2013, the block was extended to 10:00pm, as Cartoon Network takes back an hour from Adult Swim until early 2014. It's also the replacement of Cartoon Planet on Fridays.

Retrieved from "https://cartoonnetwork.fandom.com/wiki/Pizza_Night_with_Pizza_Steve?oldid=102065"
Community content is available under CC-BY-SA unless otherwise noted.