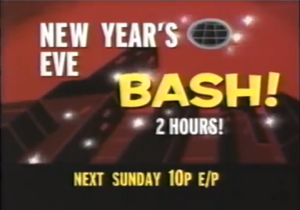 Cartoon Network's New Year’s Eve Bash was a 2-hour New Year’s marathon that aired from 10:00 PM to 12:00 AM on Sunday, December 31, 2000. The marathon featured action-themed episodes of The Powerpuff Girls and Dexter's Laboratory.

The marathon was followed by a special Toonami New Year's marathon, titled New Year's Evil, that aired from 12:00 AM to 5:00 AM.

Retrieved from "https://cartoonnetwork.fandom.com/wiki/New_Year%27s_Eve_Bash?oldid=96986"
Community content is available under CC-BY-SA unless otherwise noted.