New Year's Eve 2004 was a special New Year's Eve Cartoon Network special. The special began on Friday December 31, 2004 with a four-hour special edition of Fridays. Real life Japanese pop duo Puffy AmiYumi, joined the Fridays on-air hosts Tommy and Nzinga at 11:55 pm for the countdown to midnight that then launched into a 4-hour marathon of Hi Hi Puffy AmiYumi that began at 12:00 am. The Japanese Pop duo also performed two songs during the special including the theme song from Hi Hi Puffy AmiYumi.[1]

The festivities, which began at 7:00 pm, also featured episodes of Codename: Kids Next Door, Atomic Betty, Foster's Home for Imaginary Friends and a world premiere episode of Hi Hi Puffy AmiYumi.[1] Also, it had the remembrance of "The Best of Fridays" from 2004 and even Nzinga Blake's final appearance on Cartoon Network before Tara Sands comes in next year during the Fridays block. 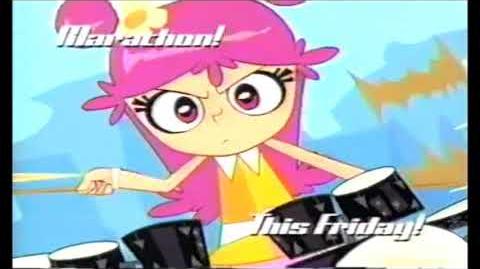 Retrieved from "https://cartoonnetwork.fandom.com/wiki/New_Year%27s_Eve_2004?oldid=98455"
Community content is available under CC-BY-SA unless otherwise noted.