My Gym Partner's a Monkey

My Gym Partner's a Monkey

22 minutes (11 minute segments)
Status
Concluded
My Gym Partner's a Monkey is an animated television series that debuted on Cartoon Network on December 26, 2005 as a sneak peek, and aired officially as a series on February 24, 2006. The show is about an impolite child named Adam Lyon who got transferred to Charles Darwin Middle School (or CDMS as most of the characters in the show call it) because of a mistake believing that he was a lion due to his last name. The show originally ended on reruns aired in 2010, then aired again from 2012 outside of the Cartoon Planet block.

Why Adam never tried to get the mistake corrected is never addressed in the series. Though its possible that aside from the animal-related classes that he would NEVER need, Adam actually enjoys the friends he made at the school more than wanting to go back to human school.

Adam made a small cameo in Codename: Kids Next Door and The Grim Adventures of Billy and Mandy crossover special, The Grim Adventures of the KND, where he was seen as one of the kids popping out of the Delightful Reaper. Jake also appeared during the end credits along with Mandark with a mini-crossover of Dexter's Laboratory titled My Gym Partner's a Mandark.

Jake appeared in Cartoon Network's 20th anniversary music video, where he was seen doing the monkey with Johnny Bravo and other Cartoon Network monkeys.

Jake Spidermonkey made a cameo appearance in the OK K.O.! Let's Be Heroes crossover episode, Crossover Nexus, where he was seen as one of the Cartoon Network heroes that were summoned and defeated by the episode's main antagonist, Strike.

All 4 seasons of the series are available on iTunes.

The series is available to watch on the Boomerang streaming service.

On february 2022, My Gym Partner's a Monkey was released on HBO Max of Latin America. 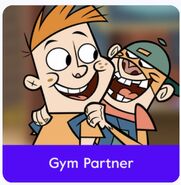 icon on the Boomerang streaming service.