Moby Dick and Mighty Mightor is a science fiction animated series created by Alex Toth for Hanna-Barbera Productions, which ran on CBS from 1967 to 1969. Despite Moby Dick's name coming first in the title, he had only one segment per half-hour episode, sandwiched between two segments of Mighty Mightor; the same structure was used the previous season for Hanna-Barbera's Frankenstein Jr. and The Impossibles. 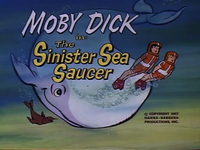 Teenage boys Tom (voiced by Bobby Resnick) and Tub (voiced by Barry Balkin) are rescued by the great white whale Moby Dick (voiced by Don Messick) after a shipwreck. Together with their pet seal, Scooby (also voiced by Messick), they face the dangers of the undersea world.

Moby Dick is stronger and faster than an average whale, and he can stretch his body to any length he desires. Some episodes also depict him as being able to command other sea creatures.

One day, while on a hunting trip, a teenage caveman named Tor (voiced by Bobby Diamond), along with his winged pet dinosaur Tog (voiced by John Stephenson), rescue an old man who, as a reward, gives Tor a magical club. When Tor raises his club to the sky, he transforms into the masked and muscular Mightor (voiced by Paul Stewart), a prehistoric superhero very much in the Space Ghost mold who possesses superhuman strength and the power of flight through his club, which can also fire energy blasts.

Mightor protects his village from evil-doers. Amongst the villagers are the chief, Pondo, and his daughter, the beautiful redhaired Sheera (voiced by Patsy Garrett). Sheera has a younger brother named Little Rok (voiced by Norma MacMillan), who loves pretending to be Mightor. The characters have several pets, including Little Rok's dodo bird Ork and Sheera's mammoth calf Bollo. 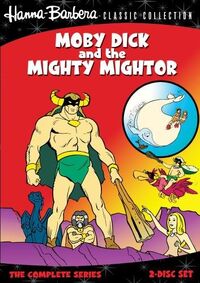 On July 19, 2011, Warner Archive released Moby Dick and the Mighty Mightor: The Complete Series on DVD as part of their Hanna–Barbera Classics Collection. This is a Manufacture-on-Demand (MOD) release, available exclusively through Warner's online store and Amazon.com.