Miguzi is a former weekday afternoon block that premiered on Cartoon Network on April 19, 2004. The block was themed around Erin, an animated young 13-year-old girl (voiced by Jessica DiCicco) who finds refuge within the confines of a strange spaceship that is trapped underwater and inhabited by aquatic creatures (including Big Stalks, Flip, Curly, Tre, Remo, Bass, Monitor, Tweet, and Yoke).

Not surprisingly, this lighter-toned action block was from Williams Street, the producers of Cartoon Network's late-night programming block Adult Swim and Toonami, a block of programming which Miguzi replaced in the weekday-afternoon timeslot after Toonami moved to Saturday nights. Miguzi changed its programming often. The block aired weekdays between 5-7pm on April 19, 2004, then starting January 15, 2006, aired from 4-6pm (later 4-5:30pm after Naruto took the 5:30pm slot on weekdays). 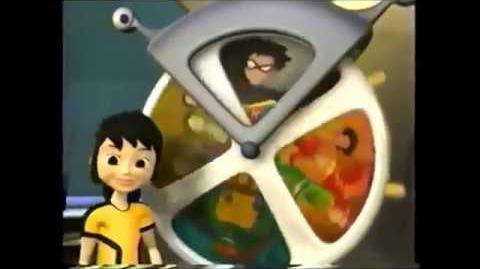 On June 20, 2004, the block also received a time slot on Sundays (3pm-5pm). The Sunday version of Miguzi featured the same lineup as the weekday version; however, only reruns from the previous week were aired.[2][3] On September 12, 2004, the Sunday schedule was changed to a viewers' choice 4-episode marathon of one of the shows from the weekday lineup. This Sunday version of Miguzi was titled Wheel of Gooz, and the promo featured a roulette wheel with 4 sections that corresponded to the 4 Miguzi shows. 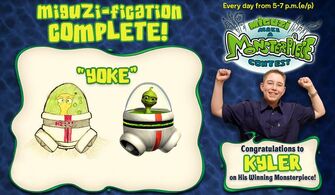 From November 22, 2004 to January 15, 2005, the "Make a MonsterPiece" contest was held on cartoonnetwork.com and viewers could enter for a chance to have their drawing appear on Miguzi. Hundreds of entries were submitted and a panel of judges selected the winning drawing that was then turned into an animated character.[4] The winning submission was "Yoke" by Kyler Spears.

In May 2007, Miguzi was replaced by Master Control, an interactive block that aired on September 24, 2007.