The Cartoon Network Wiki
Register
Don't have an account?
Sign In
Advertisement
in: Scooby-Doo Series, Shows older than the network, Hanna-Barbera Series,
and 3 more 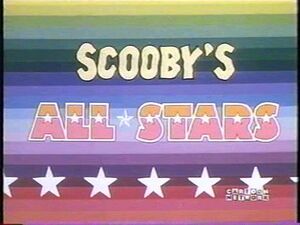 Laff-A-Lympics is the co-headlining segment, with The Scooby-Doo Show, of the Saturday morning cartoon block Scooby's All-Star Laff-A-Lympics, produced by Hanna-Barbera Productions beginning in 1977. The show was a spoof of the Olympics and the ABC television series Battle of the Network Stars, which debuted one year earlier. It featured 45 Hanna-Barbera characters organized into the teams (the Scooby Doobies, the Yogi Yahooeys, and the Really Rottens) which would compete each week for gold, silver, and bronze medals. One season of 16 episodes was produced in 1977–78, and eight new episodes combined with reruns for the 1978–79 season as Scooby's All-Stars.

The series resurfaced in 1980 and was rerun at various other points during the 1980s on ABC. It has also been frequently re-run in later years as Laff-A-Lympics on USA "Cartoon Express", Cartoon Network and Boomerang, often during the time periods when the Summer and Winter Olympics are being held.

The sporting competitions that the characters would be called upon to perform in would often be comical and offbeat versions of Olympic sports, races, and scavenger hunts. Each segment took place in a different location around the world. That event occurred on the moon as a climactic ending, which followed a rocket race to the moon that was held as the previous event.

Each episode was presented in a format similar to an Olympic television broadcast, with announcing/voice-over duties handled by an unnamed/unseen Announcer character. Hosting duties and commentary were provided by Snagglepuss and Mildew Wolf from the It's the Wolf! segments of Cattanooga Cats (though unlike It's the Wolf!, Mildew was no longer voiced by Paul Lynde; he is now voiced by John Stephenson). Since the show was airing on ABC, Snagglepuss and Mildew wore the then-traditional yellow jackets of ABC Sports announcers. Non-competing Hanna-Barbera characters such as Fred Flintstone, Barney Rubble, Jabberjaw and Peter Potamus made appearances as guest announcers and judges. Other non-competing characters included parents of contestants (who were interviewed by Mildew before events) and various monsters and creatures that would serve as antagonists during events.

Unlike most cartoon series' produced by Hanna-Barbera in the 1970s, Laff-A-Lympics did not contain a laugh track.

The Laff-A-Lympics competition was based upon a point system. Various events were worth a certain point total for the first, second, and third place winners (usually 25, 15, and 10 respectively; however, the last event was often worth either double points or a larger point bonus for the winner). The team that had the most points by the end of the half-hour was declared the winner and received the gold medal. Points could also be subtracted for treachery and sabotage, which were the specialties of the villainous Really Rottens team.

The "good guy" teams, consisting of the Scooby Doobies and the Yogi Yahooeys, were good friends and their respective team members gladly helped each other whenever they got into a jam. The Really Rottens, however, always cheated and pulled dirty tricks which would ultimately cause them to be the last-place losers in most episodes. Much like Dick Dastardly and Muttley on Wacky Races, typically the Really Rottens would be just on the verge of winning, before they would make a fatal error at the very end that allowed one of the other two teams to end up at the top. Occasionally, though, the Rottens' cheating technique wouldn't actually be against the rules, which resulted in them (unlike Dastardly and Muttley) actually winning in a few episodes; there was even one episode where they won through sheer chance.

This team drew mainly from the 1970s Hanna-Barbera cartoons, particularly the "mystery-solving" series derived from The Scooby-Doo Show whose titular character served as team captain. The early production art for the series showed Jeannie from the Jeannie series and Melody, Alexander, Alexandra, and Sebastian the Cat from the Josie and the Pussycats series as members of the "Scooby Doobies" team, but legal problems with Columbia Pictures Television, Screen Gems' successor, prevented it. Hanna-Barbera owned Babu, but Columbia controlled all rights to Jeannie's image. As a result, Babu appeared alone as a member of the "Scooby Doobies". Likewise, Archie Comics held rights to the Josie characters. In the actual series, Jeannie was replaced by Hong Kong Phooey and the Josie characters were replaced by Captain Caveman and the Teen Angels.

Among the members of the Scooby Doobies are:

This team drew mainly from the 1950s and 1960s Hanna-Barbera cartoons and is the only team made up completely of anthropomorphic animals. Grape Ape is the only post-1962 character in the line-up.

Among the members of the Yogi Yahooeys are:

This team is composed of villainous characters. With the exception of Mumbly and the Dalton Brothers, all of the members are original characters, many of whom are based on various characters that appeared in cartoons and comics prior to Laff-A-Lympics. Originally, Muttley and Dick Dastardly were planned as the leaders of the Really Rottens; however, they could not appear on the show due to those characters being co-owned by Heatter-Quigley Productions. In their place, Hanna-Barbera used the existing character Mumbly and created the new character Dread Baron. Prior to Laff-A-Lympics, Mumbly was a heroic detective rather than a villain on his original show. Following the character's revision as the villainous team leader, he remained a villain in Yogi Bear and the Magical Flight of the Spruce Goose, which was also Dread Baron's only other role. The Dalton Brothers appeared in 1950s and 1960s shorts (including the 1958 short "Sheriff Huckleberry Hound", which featured appearances by Dinky, Dirty, and Dastardly Dalton, as well as their other brothers Dangerous, Detestable, Desperate, and Despicable). However, they were given new character designs for the Laff-A-Lympics series. After Laff-A-Lympics, Dinky reappears in The Good, the Bad, and Huckleberry Hound with brothers Stinky (who bears a resemblance to Dastardly Dalton from Laff-A-Lympics), Finky, and Pinky.

Among the members of the Really Rottens are:

4. "The Sahara Desert and Scotland"

6. "Athens, Greece and the Ozarks"

9. "Spain and the Himalayas"

12. "The Grand Canyon and Ireland"

17. "Russia and the Caribbean" 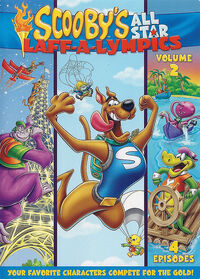 The first four episodes were released on Region 1 DVD on January 19, 2010, as Scooby's All-Star Laff-A-Lympics, Volume 1. Target released an exclusive second volume with the next four episodes on the same day titled Scooby's All-Star Laff-A-Lympics, Volume 2. The volume would released to other stores on October 19, 2010. A new DVD entitled Scooby-Doo! Laff-A-Lympics: Spooky Games was released on July 12, 2012. the set contains an all-new Scooby Doo special "Spooky Games", plus 12 episodes of Laff-a-Lympics on a 2-disc set, to complete the first season following up from the first two volumes. This new set includes an UltraViolet digital copy of all 12 contained episodes.