The Cartoon Network Wiki
Register
Don't have an account?
Sign In
Advertisement
in: Hanna-Barbera Series, 1970s shows, Shows older than the network,
and 3 more

Josie and the Pussycats in Outer Space

Josie and the Pussycats in Outer Space

In the mid-1980s, both series, along with a number of other 1970s Hanna-Barbera cartoons, were on board USA Network's "Cartoon Express"; they would next appear on Cartoon Network in 1992, where all 32 episodes were run in the same timeslot. Both series, as of 2012, are in the library of Boomerang (Time Warner's archive cartoon channel) but do not air on a regular basis. When it does air, it is typically as part of the channel's block of mystery-solving cartoons, "Those Meddling Kids!" or pops up in the two-hour tribute block of "Boomeroyalty".

This version of the series launched the characters into outer space; the opening credits sequence shows the group taking a promotional photo at the launch site of a new spaceship and a jealous Alexandra elbowing the cast aside to steal the spotlight from Josie. However, Alexandra is jerked inside as well and triggers the launch sequence, sending them and the ship into deep space. Every episode centered on the Pussycats landing on a strange new world, where they would encounter and often be kidnapped by various alien races before escaping and attempting to return home.

Much like the original series, musical numbers and chase sequences set to newly recorded songs were featured. Josie in Outer Space also added the character Bleep, a pet-sized fluffy alien adopted by Melody, who was the only one who could understand the creature (who only says "Bleep").

Josie McCoy - the red-haired guitarist and leader of the band. Josie shares an attraction with Alan, the road manager.

Valerie Brown - an African American girl who plays the tambourines. The voice of reason in the group, Valerie is highly intelligent and a mechanical wizard.

Melody Valentine - the band's drummer, Melody is blonde and slightly air headed, but what she lacks in intellect she makes up for in heart, wit, her perpetual sweetness and optimism.

Alexandra Cabot - the ongoing antagonist of the series, identified by her long black pony-tailed hair with a white streak through the center of it, suggesting a pole-cat, or skunk. Selfish and bullying, Alexandra bills herself as "the real star of the band", though she does little more than stand around scowling with her arms folded, always jealous of the attention the others get, especially Josie. Her sole "talent" is her constant plotting to steal the spotlight and Alan's affections from Josie, only to have every scheme fail in humiliating fashion.

Alexander Cabot III - Alexandra's brother and the group's manager, highly identifiable by his colorful, wacky wardrobe including his green rimmed sunglasses, orange shirt collar, violet-red ascot, green shirt, purple pinstriped pants, yellow shoes, and green socks. Alexander is an admitted coward but, in sharp contrast to Alexandra, is good-hearted. Alexander and Valerie have a slight attraction to one another at times.

Sebastian - Alexandra's pet cat, whose black and white fur resembles Alexandra's hair. He enjoys being mean and sometimes appears to go to the enemy's side. Alexandra sometimes asks Sebastian to do things to Josie, but her tricks usually backfire.

Bleep - a small fluffy alien from the planet Zelcor who was discovered and adopted by Melody. He is pink and covered in white fur and speaks only by saying "Bleep." 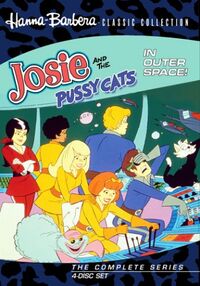 On October 19, 2010, Warner Archive released Josie and the Pussycats in Outer Space: The Complete Series on DVD in Region 1 as part of their Hanna–Barbera Classics Collection of Manufacture-on-Demand (MOD) releases. Josie in Outer Space is available exclusively through Warner's online store and Amazon.com.