The Cartoon Network Wiki
Register
Don't have an account?
Sign In
Advertisement
in: Shows, 1970s shows, Hanna-Barbera Series,
and 2 more

Josie and the Pussycats

Josie and the Pussycats

In the mid-1980s, both series, along with a number of other 1970s Hanna-Barbera cartoons, were on board USA Network's "Cartoon Express"; they would next appear on Cartoon Network in 1992, where all 32 episodes were run in the same timeslot. Both programs, as of 2012, are in the library of Boomerang (Time Warner's archive cartoon channel) but do not air on a regular basis. When it does air, it is typically as part of the channel's block of mystery-solving cartoons, "Those Meddling Kids!" or pops up in the two-hour tribute block of "Boomeroyalty".

Josie and the Pussycats featured an all-girl pop music band that toured the world with their entourage, getting mixed up in strange adventures, spy capers, and mysteries. On the small-screen, the group consisted of level-headed lead singer and guitarist Josie McCoy, intelligent tambourinist Valerie Brown, and air-headed blonde drummer Melody Valentine. Other characters included their cowardly manager Alexander Cabot III, his conniving sister Alexandra, her cat Sebastian, and muscular roadie Alan M.Mayberry

The show, more similar to Hanna-Barbera's successful Scooby-Doo, Where Are You! than the original Josie comic book, is famous for its music, the girls' leopard print leotards (replete with "long tails and ears for hats," as the theme song states), and for featuring Valerie as the first regularly appearing female black character in a Saturday morning cartoon show. Each episode featured a Josie and the Pussycats song played over a chase scene, which, in a similar fashion to The Monkees, featured the group running after and from a selection of haplessly villainous characters.

Every episode of the show would find the Pussycats and crew en route to perform a gig or record a song in some exotic location. Somehow, often due to something Alexandra did, they would accidentally find themselves mixed up in an adventure/mystery. The antagonist was always a diabolical mad scientist, spy, or criminal who wanted to take over the world using some hi-tech device. The Pussycats would usually find themselves in possession of the plans for an invention, an item of interest to the villains, a secret spy message, etc., and the villains would give chase. Eventually, the Pussycats would formulate a plan to destroy the villain's plans and bring them to justice, which result in a final chase sequence set to a Pussycats song.

The Pussycats would succeed in capturing the villain and get back to their gig/recording session/etc. The final gag always centered around one of Alexandra's attempts to interfere with/put an end to The Pussycats' performance and/or steal Alan away from Josie.

The show’s theme song, titled "Josie and the Pussycats", was written by Hoyt Curtin, William Hanna (under the pseudonym "Denby Williams"), and Joseph Barbera (under the pseudonym "Joseph Roland"). Patrice Holloway, the singing voice of Valerie, sings the lead vocal on the recording. The theme song was based on melodies from an incidental tune played on various Hanna-Barbera cartoons. A cover of "Josie and the Pussycats", performed by Juliana Hatfield and Tanya Donelly, is included on the 1995 tribute album Saturday Morning: Cartoons' Greatest Hits, produced by Ralph Sall for MCA Records.

In preparation for the upcoming cartoon series, Hanna-Barbera began working on putting together a real-life Josie and the Pussycats girl group, who would provide the singing voices of the girls in the cartoons and also record an album of songs to be used both as radio singles and in the TV series.

The Josie and the Pussycats recordings were produced by La La Productions, run by Danny Janssen and Bobby Young. They held a talent search to find three girls who would match the three girls in the comic book in both looks and singing ability; early plans, which did not come to fruition, called for a live-action Pussycats segment at the end of each episode. After interviewing over 500 finalists, settled upon casting Kathleen Dougherty (Cathy Dougher) as Josie, Cherie Moor (actress Cheryl Ladd) as Melody, and Patrice Holloway as Valerie.

Janssen presented the newly formed band to William Hanna and Joseph Barbera to finalize the production deal, but was in for a surprise. Hanna-Barbera wanted Janssen to recast Patrice Holloway, because they had decided to portray "Josie and the Pussycats" as an all-white trio and had altered Valerie, who had been conceived as African-American and was already appearing as such in Archie's revamped Josie and the Pussycats comic book, to make her white. Janssen refused to recast Holloway and threatened to walk away from the project. After a three-week-long stand-off between Janssen and Hanna-Barbera, Hanna-Barbera finally relented and allowed Janssen to keep Holloway, and changed Valerie back to being African-American.

Josie McCoy is the red-haired guitarist and leader of the band. Josie shares an attraction with Alan, the road manager.

Valerie Brown is an African American girl who plays the tambourines. The voice of reason in the group, Valerie is highly intelligent and a mechanical wizard.

Melody Valentine is the band's drummer. Melody is blonde and slightly airheaded, but what she lacks in intellect she makes up for in heart; wit, her perpetual sweetness and optimism.

Alexandra Cabot is the ongoing antagonist of the series while technically at the same the supporting member of the group, identified by her long black pony-tailed hair with a white streak through the center of it, suggesting a pole-cat, or skunk. Selfish and bullying, Alexandra bills herself as "the real star of the band", though she does little more than stand around scowling with her arms folded, always jealous of the attention the others get, especially Josie. Her sole "talent" is her constant plotting to steal the spotlight and Alan's affections from Josie, only to have every scheme fail in humiliating fashion. Despite her grouchy personality and schemes, she is very loyal and has a caring heart to the group .

Alexander Cabot III is Alexandra's brother and the group's manager, highly identifiable by his colorful, wacky wardrobe including his green rimmed sunglasses, orange shirt collar, violet-red ascot, green shirt, purple pinstriped pants, yellow shoes, and green socks. Alexander is an admitted coward but, in sharp contrast to Alexandra, is good-hearted. Alexander and Valerie have a slight attraction to one another at times.

Sebastian is Alexandra's pet cat, whose black and white fur resembles Alexandra's hair. He enjoys being mean and sometimes appears to go to the enemy's side. Alexandra sometimes asks Sebastian to do things to Josie, but her tricks usually backfire.

2. "A Greenthumb Is Not a Goldfinger" 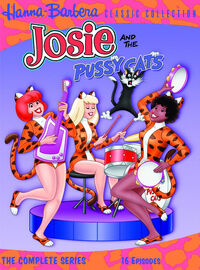 A Josie and the Pussycats: The Complete Series two-DVD box set was released on September 18, 2007. All sixteen episodes, minus the laugh tracks, were included, as well as a half-hour documentary on the life and career of Dan DeCarlo.