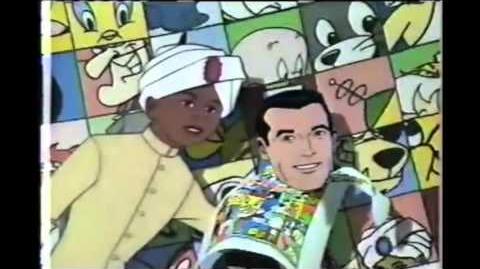 Jonny Quest, often casually referred to as The Adventures of Jonny Quest is an American science fiction/adventure animated television series about a boy who accompanies his scientist father on extraordinary adventures. It was produced by Hanna-Barbera Productions for Screen Gems, and created and designed by comic book artist Doug Wildey.

Inspired by radio serials and comics in the action-adventure genre, it featured more realistic art, characters, and stories than Hanna-Barbera's previous cartoon programs. It was the first of several Hanna-Barbera action-based adventure shows – which would later include Space Ghost, The Herculoids, and Birdman and the Galaxy Trio. The series ran on ABC in prime time on early Friday nights for one season in 1964–1965.

After spending two decades in reruns, during which time it appeared on all 3 major US television networks of the time, new episodes were produced for syndication in 1986 as part of The Funtastic World of Hanna-Barbera's second season. Two telefilms, a comic book series, and a more modern revival series, The Real Adventures of Jonny Quest, were produced in the 1990s.

The Quests have a home compound in the Florida Keys (on the island of Palm Key), but their adventures take them all over the world. The Quest team travels the globe studying scientific mysteries, which generally end up being explained as the work of various bad guys. Such pursuits get them into scrapes with foes that range from espionage robots and electrical monsters to Egyptian mummies and pterosaurs. Although most menaces appeared in only one episode each, one recurring nemesis is known as Dr. Zin, an Asian criminal mastermind. With yellow skin and a diabolical laugh, Zin was an example of the Yellow Peril villains common in Cold War-era fiction.

Jonny is an 11-year-old American boy who lost his mother at an early age. Though unenthusiastic in his schooling, he is adventurous and generally athletic, with a proficiency in judo, scuba diving, and the handling of firearms. He takes on responsibility willingly, attending to his studies, and treating adults with respect. His voice was provided by actor Tim Matheson.

Dr. Quest is Jonny's father and a US government scientist, considered to be "one of the three top scientists in the world," with interests and technical know-how spanning many fields. Raising Jonny and Hadji as a single father, he is conscientious and kind, though willing and able to take violent decisive action when necessary for survival or defense. Benton Quest was voiced by John Stephenson for five episodes, and by Don Messick for the remainder of the series.

Race is a special agent / bodyguard / pilot from Intelligence One. Governmental fears that Jonny could "fall into the wrong hands" resulted in Bannon's assignment to guard and tutor him. Race was born in Wilmette, Illinois, to John and Sarah Bannon. He is an expert in judo, having a third-degree black belt as well as the ability to defeat noted experts in various martial arts, including sumo wrestlers. The character was voiced by Mike Road, with his design modeled on actor Jeff Chandler. The name is a combination of Race Dunhill and Stretch Bannon from an earlier Doug Wildey comic strip. The surname Bannon is Irish (from 'O'Banain') meaning "white".

Hadji is a streetwise, 11-year-old Calcutta orphan, who becomes the adopted son of Dr. Benton Quest and is also Jonny's best friend. Rarely depicted without his bejeweled turban and Nehru jacket, he is proficient in judo, which he learned from an American Marine. The seventh son of a seventh son, Hadji seems to possess mystical powers (including snake charming, levitation, magic, and hypnotism) which may or may not be attributed to parlor trickery. The Quests meet Hadji while Dr. Quest is lecturing at Calcutta University; he saves Dr. Quest's life (by blocking a thrown knife intended for the doctor with a basket lid) and is subsequently adopted into the Quest family.[15] Though slightly more circumspect than Jonny, he can reliably be talked into participating in most any adventure by his adoptive brother. He is voiced by Danny Bravo. In the sequel series The Real Adventures of Jonny Quest, Hadji is revealed to be an Indian prince, and is given the last name Singh.

Bandit is the name of Jonny's pet, a small white dog. He has been so named because his eyes have a black, mask-like coloration around them. This coloration is occasionally instrumental in foiling antagonists. Though unable to speak, in the manner of some other Hanna-Barbera cartoon dogs, he seems uncannily able to understand human speech and is capable of complex facial expressions. Don Messick provided Bandit's vocal effects, which were combined with an archived clip of an actual dog barking. Creator Doug Wildey wanted to have a monkey as Jonny's pet, but he was overruled by Hanna-Barbera. Wildey has also said that Bandit was intended to be a bulldog. However, Bandit does not actually conform to any breed standard. His tail is too long for any bulldog variant. He is too small to be an English Bulldog, unless he remains a puppy throughout the series. His ears are floppy, so he does not conform to the breed standard for a French Bulldog. In many ways he resembles a pug, except that pugs have a distinctive curved tail.

As the first major studio devoted to television animation (with previous studios, such as Warner Bros. and Disney, devoted to animation for theatrical release), Hanna-Barbera developed the technique of limited animation in order to cut corners and meet the tighter scheduling and budgetary demands of television. As opposed to full animation, this means that characters generally move from side to side with a sliding background behind them and are drawn mostly in static form, with only the moving parts (like running legs, shifting eyes, or talking mouths) being re-drawn from frame to frame on a separate layer.

This was particularly true of Jonny Quest. The series' visual style was unusual for its time, combining a fairly realistic depiction of human figures and objects with the limited animation technique (although not so limited as that of Hanna-Barbera's contemporaneous daytime cartoons). The series made heavy use of rich music scores, off-screen impacts with sound effects, reaction shots, cycling animations, cutaways, scene-to-scene dissolves, and abbreviated dialogue to move the story forward, without requiring extensive original animation of figures. For example, objects would often reverse direction off-screen, eliminating the need to show the turn, or a running character would enter the frame sliding to a stop, allowing a single drawn figure to be used.

Jonny Quest first aired on September 18, 1964, on the ABC network, in prime time, and was an almost instant success, both critically and ratings-wise. It was canceled after one season, not because of poor ratings, but because each episode of the show went over budget.

Like the original Star Trek television series, this series would be a big money-maker in syndication, but this avenue to profits was not as well-known when the show was canceled in 1965. Reruns of the show were broadcast on CBS from September 9, 1967, to September 5, 1970, and on NBC from September 11, 1971, to September 2, 1972. This makes it one of the few television series to air on all three of the major national broadcast networks in the USA. Reruns also aired sporadically on Cartoon Network from the time of its launch on October 1, 1992, until May 4, 2003. 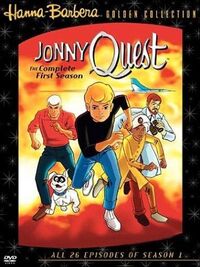 On May 11, 2004, Warner Home Video released Jonny Quest: The Complete First Season on DVD in Region 1, which features all 26 episodes of the original series, although some have been edited for content, and nearly all episodes have incorrect closing credits.