The Cartoon Network Wiki
Register
Don't have an account?
Sign In
Advertisement
in: Shows, 1970s shows, Hanna-Barbera Series,
and 2 more

Jabberjaw is a Saturday morning animated series created by Joe Ruby and Ken Spears and produced by Hanna-Barbera Productions. Sixteen 30-minute episodes of Jabberjaw were produced, which aired on ABC Saturday Morning from September 11, 1976, to September 3, 1977. The episodes were then rebroadcast as reruns on Sunday Morning from September 11, 1977, to September 3, 1978. In the 1980s, reruns resurfaced on USA network's "Cartoon Express" and from 1992 to 2000 the series aired on Cartoon Network. Since 2000 the series has aired on Cartoon Network's sister network Boomerang, but currently only airs occasionally.

The title character is a 15-foot tall talking, air breathing, anthropomorphic great white shark (voiced by Frank Welker, imitating Curly Howard of the Three Stooges) who plays the drums in a rock band called The Neptunes. The Neptunes are a rock group made up of four teenagers — Biff, Shelly, Bubbles and Clamhead — who live in an underwater civilization in the year 2076 (100 years from 1976, when the show premiered).

Jabberjaw and The Neptunes travel to various underwater cities where they encounter and deal with diabolical villains who want to conquer the undersea world.

Per a great deal of Hanna-Barbera's output in the 1970s, the format and writing for Jabberjaw was similar to that of Scooby-Doo, Where Are You!, Josie and the Pussycats and Speed Buggy. The series also drew inspiration (in the use of a shark as a character) from the overall shark mania of the 1970s and the then-recent film Jaws. It also shared The Flintstones' penchant for making use of puns as the names of locations, people, etc., in this case, ocean-themed puns (such as "Aqualaska" instead of Alaska).

Like many animated series created by Hanna-Barbera in the 1970s, the show contained a laugh track created by the studio.

Jabberjaw (voiced by Frank Welker) is an air-breathing, anthropomorphic great white shark whose voice and mannerisms were similar to Curly Howard of the Three Stooges. Jabberjaw found it hard to get respect in a society where "shark ejector" (robots that would guard various buildings or cities against sharks being allowed to enter) were commonplace, prompting him to frequently utter his catchphrase (borrowed from the late comedian Rodney Dangerfield): "No respect!" Jabberjaw is the band's drummer.

Biff (voiced by Tommy Cook) is an athletic, brown-haired young man who is the band's guitar player and level-headed leader who books all the gigs, similar to Scooby-Doo's Fred and Josie and the Pussycats' Alan and he has a crush on shelly.

Shelly (voiced by Patricia Parris) is a dark-haired young woman who plays tambourine for The Neptunes. Shelly is attractive, intelligent, haughty and abrasive (like Josie and the Pussycats' Alexandra) and while she holds a great deal of contempt for Jabberjaw (or "blubberhead" as she calls him), she does have some fondness for him deep down and occasionally shows it. Also, she's sometimes irritated by Bubbles' idiocy.

Bubbles (voiced by Julie McWhirter) is a girl with blonde, curly hair who plays keyboard for The Neptunes. She is extremely ditzy and dimwitted, has a cute giggle, similar to Josie and the Pussycats' Melody. Shelly sometimes nicknames her "Ding-a-Ling" or "Bubblehead". Her voice and mannerisms are similar to Gracie Allen, wife of George Burns. Whenever she volunteers to help, she usually ends up messing it up.

Clamhead (voiced by Barry Gordon) is a young man who plays bass for The Neptunes. His catchphrases are crying out "Abba-abba-abba!" and "Wowee-wow-wow!" whenever he gets excited. Clamhead is Jabberjaw's best friend, and bears a strong resemblance to Scooby-Doo's Shaggy, Speed Buggy's Tinker, and Josie and the Pussycats' Alexander.

9. "Ali Jabber and the Secret Thieves" 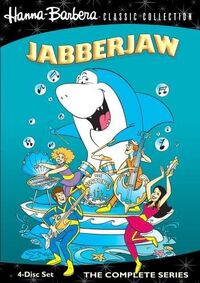 On February 15, 2011, Warner Archive released Jabberjaw: The Complete Series on DVD as part of their Hanna–Barbera Classics Collection. This is a Manufacture-on-Demand (MOD) release, available exclusively through Warner's online store and Amazon.com.