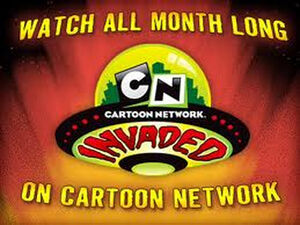 Cartoon Network Invaded was a special crossover event that aired on Cartoon Network in the United States from May 4, 2007 through May 28, 2007. It involved a continuing storyline of an alien invasion that ran through five different episodes of five different CN Original Series: Foster's Home for Imaginary Friends, Ed, Edd n Eddy, My Gym Partner's a Monkey, Camp Lazlo, and The Grim Adventures of Billy & Mandy.

According to Maxwell Atoms, creator of Billy and Mandy, the event occured because Kraft Cheese sponsored it, hence the connections between cheese and the aliens on each show's episode. However the company backed out at the last minute so the episodes were shown as a special event on the network.

Part I: Cheese A Go-Go 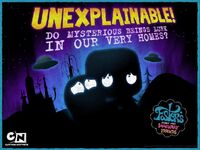 In this episode of Foster's, Frankie is speeding around town to find Bloo, pick up Eduardo from the dentist, and go to the courthouse downtown. She picks up Cheese, who is yelling "Gotta Go!" repetitively and picks up both Mac and Bloo at the local movie theater where Bloo was seeing a science fiction film titled "Brain Sucking Aliens From The Moon." They also pick up Eduardo from the dentist, who is still loopy from anesthetics. Eduardo ironically tells Bloo he's hiding from the aliens just like in the movie. After hearing his statement, a concern Bloo feels as if Cheese is an evil extraterrestrial hitman hired to help start riots in every country and to escape with people's knowledge and mind. Then they're en route to the courthouse where Wilt is defending Madame Foster. When Bloo, Eduardo, and Cheese are told by Frankie to remain on the Foster's bus, Bloo uses it's 2-way radio to contact the galaxy. But when he says "Cheese," it only attracts a busy-bodied imaginary friend who then takes part in their objectives.

Bloo then traps Cheese in a picnic blanket, takes the bus's 2-way radio, and takes him to an observatory tower yelling, "We have your Cheese, aliens!" When the group leaves the courthouse, they find Bloo, Cheese, and Eduardo missing, and then everybody falls out and the bus gets towed away. A law enforcer then tells them their bus was parked in a "No Parking Zone." Then Coco, Jackie Khones, and the law enforcer go to get a sandwich. So Wilt and Frankie look for Bloo, Eduardo, and Cheese while Mac and Madame Foster attempt to retrieve the bus. But with Eduardo sprinting all over the community, smooching citizens on the head, the citizens think he's doing it to remove their brains. As Wilt attempted to intercept him, the cops decided to investigate also. Frankie then arrives at the observatory to drag Bloo and Cheese away. And when Frankie returns Cheese home to his rightful owner, Louise (who is Mac's neighbor), Madame Foster contacts her telling that she and the entire crew is under solitary confinement. Frankie responds by telling her she'll be at the penitentiary first thing in the morning. And as luck would have it, that evening back at the observatory, an unidentified flying object comes beeping as the aliens inside it moan, "Cheese." The imaginary friend Cheese also returns to the observatory which means the start of the alien invasion!

Part II: The Eds are Coming 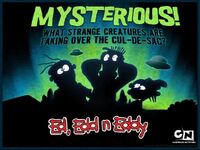 That night, Jimmy believes that aliens are coming to collect the Cul-de-Sac. Meanwhile, Jonny 2x4 and Plank try to find Rolf at his house. However, an eerily green glow and mist is coming out of the place. Meanwhile, Edd is tutoring Eddy but then hears Jonny screaming. Jonny tries to tell everyone that the aliens are coming, but only Jimmy (With a sunburned face) believes him.

Everyone realizes that Ed is missing. Edd reveals a note found at Ed's that says "At Rolf's, needs help." Jimmy and Jonny think that the "aliens" have captured Ed. A meteor then shoots out of Rolf's chimney and crash lands in the playground. The neighborhood kids check on the so-called meteor when a gooey, green hand pops out of it. Everyone panics and hides. Eddy and Edd then run off but bump into the "alien." The collision between it and the two Eds causes the goo to come off, revealing the alien to only be Ed.

Ed tells of his experience at Rolf's place. Kevin then takes the role as leader and try to storm Rolf's house, however a circle of heat is covering the area. After planning how to attack Rolf's heat-covered house, choosing weapons and creating heat-vision shields, everyone storms the house, but to no avail. Kevin storms off but Ed thinks of a plan. This plan involved a female sacrifice, Nazz.

Later that night, everyone gets ready to attack. One of the "aliens" comes out of the house. Revealing itself to be Rolf. He also reveals that the other "aliens" in the house are Rolf's relatives, staying for a while. Everyone goes home. Though Jimmy's nightmare becomes a reality when claws and buzz-saws fall from a UFO and swipes the Cul-de-Sac, taking it through space. 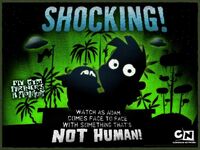 All the power in the town is out. Even for vehicles! So everyone has to walk to school. On their way, Windsor Gorilla reveals a magazine about the recent alien events. The kidnapping of the Cul-de-Sac made front page news and shows the Eds (marking it one of the only time the Eds have appeared on another show - the other being the KND/Billy & Mandy crossover episode). Meanwhile, a new kid arrives at Charles Darwin Middle School named Rick. Rick tries to trick everyone into thinking he's an alien by mentioning Brain Juice. It seems to work but not for Adam, who believes Richard is just a normal platypus. In the end, Richard reveals that the brain juice he kept talking about was just a normal juice drink. 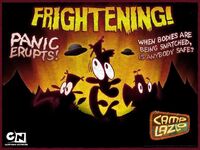 Strange Trout from Outer Space: Aliens kidnap Samson and reveal that they're here for cheese. Most likely because they didn't know that cheese was just the name of the imaginary friend in "Cheese A Go-Go." However, after torturing him, the aliens realize that Samson would not make a good hostage. So they throw him off the UFO. Three new Bean Scouts arrive and appear to be Canadian. Samson thinks the trouts are aliens and tries to prove it as the "aliens" steal Musili's cheese stash. The trouts then leave Camp kidney in a car. The three background characters that helped Samson appear to be the aliens in disguise. They then get beamed up into their ship and take off to Acorn Flats.

Cheese Orbs: The aliens arrive at Acorn Flats. The campers get ready for their Annual International Cheese Ball. However, Patsy and her friends don't go as Patsy is allergic to cheese. Nina reveals her latest invention. This invention won't let a single molecule get to Patsy so she can go to the Cheese Ball. However, Patsy goes to fast and crashes, destroying the vehicle. Nina then walks around the camp at night and is confronted by the aliens. Nina invites them into her lab. Nina asks what part of the galaxy they're from, Zygat 12 or Sector Z (A reference to the missing Kids Next Door operatives). The aliens then play board games all night. The next day, Patsy and Gretchen try to lure Nina out with no success. Everyone, including the Jellybean Scouts, arrive at the Cheese Ball. The aliens almost vaporize Nina, though at the last second, the Cheese Ball starts. However, Patsy eats all the cheese to look like an alien in order to bring Nina back. The aliens then find out that all the cheese is gone, foiling their plans, for now. 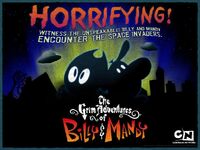 The alien's plans are finally revealed. They plan to escape with all of the earth's cheese. When it's the full moon, the aliens will turn into Werewolves and eat everyone. They will then replace everyone with cardboard cutouts. Cardboard cameos of Numbuh Two (Codename: Kids Next Door), Dexter (Dexter's Laboratory, though he was facing backwards), Mac, Bloo (Foster's Home for Imaginary Friends) and Ed (Ed, Edd n Eddy). The aliens also implanted a huge bomb in Sperg's head that explodes 12 hours from when it was first implanted. When fighting, Mandy "accidentally" sets off the bomb.

The alien's plans almost succeed. Billy was even turned into a werewolf. However, Grim turns everyone into superheroes. Meanwhile, Sperg is singing in the control room during his final seconds. His head then explodes, saving Earth. However, he is still alive. He's only headless. The aliens, on the other hand, rebuild the moon using the cheese sprayed from their armpits. As they are sinking in the cheese and eating their way out, the Kids Next Door are seen playing video games at the Moon Base when Numbuh 1 smells the cheese. Numbuhs 1, 3, 4, and 5 look at Numbuh 2, thinking that he "cut the cheese."

During the end credits, the undercover agents did cameo appearances. Wally from Camp Lazlo as Agent 405, Richard from My Gym Partner's A Monkey as Agent 804, Plank from Ed, Edd n Eddy as Agent 314 and Pud'n from Billy & Mandy as Agent 001. The aliens had also captured five earthlings in order to absorb their brain juice. These cameo appearances are actually five of Earth's most idiotic characters, Slips Python (My Gym Partner's A Monkey), Cheese (Foster's Home), Skip (Camp Lazlo), Ed (Ed, Edd n Eddy) and Fred Fredburger (Billy & Mandy). This was conclusive evidence that Cartoon Network Invaded was a conspiracy!

As a crossover event, all five episodes share a bunch of themes with each other

Community content is available under CC-BY-SA unless otherwise noted.